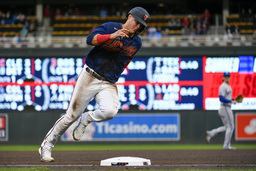 MINNEAPOLIS (AP) Whit Merrifield drove in two runs with a double and scored on Bobby Witt Jr.'s double, as the Kansas City Royals rallied for three runs in the eighth inning and beat the Minnesota Twins 3-2 Thursday night.

Josh Staumont (2-1) worked a scoreless inning and picked up the win. Scott Barlow escaped a bases-loaded jam in the eighth and stranded two on base in the ninth to earn his fifth save as the Royals snapped a seven-game losing streak.

Devin Smeltzer pitched seven scoreless innings for the Twins before Tyler Duffey (2-3) let the lead slip away in the eighth. Emmanuel Rivera singled with one out and moved to second on Ryan O'Hearn's two-out, pinch-hit single. Merrifield then lined a double into the gap in right-center to tie the score at 2. After Andrew Benintendi walked, Witt doubled to left-center, scoring Merrifield with the go-ahead run.

"You hope to have that big hit - that's the thing that's eluded us more than anything else. But (Merrifield) comes through there," Royals manager Mike Matheny said. "Then Bobby ... just shortens up, doesn't try to do too much, just uses the middle of the field and the next thing you know, we've got an opportunity to walk away with a win."

The Twins tried to rally in their half of the eighth, loading the bases on singles by Gary Sanchez, Gio Urshela and Luis Arraez with no outs. But Barlow came on to strike out the next two batters and retired Max Kepler on a soft grounder to first base, leaving the bases loaded.

Minnesota put runners on the corners with two outs in the ninth as well, but Witt made a nice play on Urshela's hard-hit grounder for the final out.

Barlow threw a season-high 41 pitches to earn the six-out save. He got plenty help from his catcher, rookie MJ Melendez, who blocked four pitches in the dirt in the eighth inning, all with the tying run on third base.

"To be able to get through that, Scotty's got to make great pitches, but he's also got to have a lot of faith in MJ," Matheny said. "And MJ did a phenomenal job keeping the ball in front and giving Scott confidence because he has to be able to do that."

Smeltzer handcuffed the Royals all night, relying mostly on a mix of fastballs and changeups. He allowed two hits and walked one while striking out six. He was starting in place of Joe Ryan, who was added to the COVID-19 IL on Wednesday. In his most recent appearance, Smeltzer held the Royals to one run over 5 1/3 innings in a 6-4 Twins victory on May 20.

"I don't know if you can go out there and pitch much better than he did," Twins manager Rocco Baldelli said. "He did a very, very nice job in every way. The opposition looked uncomfortable in a lot of at-bats. He kept them off-balance nicely and missed a few bats as well. Everything we could ask for from him."

The Twins got on the board in the second inning on Ryan Jeffers' RBI single. They added their second run in the fourth when Jose Miranda doubled and came around on a two-out single by Gilberto Celestino.

WELCOME TO THE SHOW

Kansas City's Brewer Hicklin made his major league debut on Thursday, batting ninth and playing center field. He was hitting .266 with five home runs and 24 RBIs in 42 games at Triple-A Omaha this year.

Hicklin struck out looking in his first two at-bats against Smeltzer and was replaced by a pinch hitter in the eighth inning.

"Coming in there with bases loaded and nobody out and just doing what he did - that's what fires you up. . That's something that maybe it can change the whole entire season or something, just get us going." - Witt on the impact of Barlow's performance

Royals: OF Kyle Isbel and LHP Amir Garrett were placed on the IL. The team did not reveal the nature of their injuries, though Isbel was scratched from Tuesday's game at Arizona due to illness.

Twins: INF Jorge Polanco missed his third straight game with right ankle soreness, but manager Rocco Baldelli said he anticipates Polanco will return to the lineup as soon as Friday.

Twins: Minnesota will counter with RHP Bailey Ober (1-1, 2.55), who came off the IL on Sunday and held the Royals to one run in five innings pitched. Ober had missed three weeks due to a right groin strain.