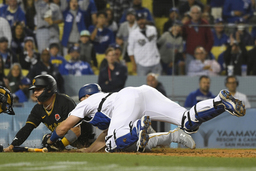 LOS ANGELES (AP) At least in May, the young Pittsburgh Pirates have the Los Angeles Dodgers' number.

Against one of the best lineups in baseball, the Pirates blew a 4-0 lead, fell behind in the eighth inning and then rallied in the ninth to eke out a wild 6-5 victory Monday night.

"That's a huge team victory for us. We kept battling back," said manager Derek Shelton, who earned his 100th career win. "We continued to grind out at-bats. It was cool to see."

Los Angeles scored twice in the eighth to take its only lead before the Pirates charged right back against closer Craig Kimbrel (0-1), who was handed his first blown save of the season.

"I'll be the first one to tell you my last couple outings have been pretty bad," Kimbrel said. "Haven't really been like I should be. I've been hurting myself a lot by walking guys and throwing wild pitches or hitting guys."

The Pirates have beaten the Dodgers in three of four meetings this month. Los Angeles was coming off an 8-2 road trip that included a four-game sweep of Arizona.

"We've played well against them and we haven't beat ourselves, which is the most important thing," Shelton said. "You really have to execute because they're so good."

With one out in the ninth, Diego Castillo walked and moved to second on Kimbrel's wild pitch that went to the backstop. Perez singled to deep right field, scoring Castillo, and advanced to second on the throw home.

Chavis scored the go-ahead run on Freeman's error when a ball hit by Cal Mitchell went off the first baseman's glove.

The Dodgers - with a major league-leading 13 comeback victories - weren't done yet.

Betts stayed put on Trea Turner's long fly to right field for the second out. Will Smith struck out swinging to end an 0-for-5 performance and the game.

The Dodgers trailed 4-0 early but briefly took the lead in the eighth against Bednar.

Turner doubled leading off as the ball popped out of second baseman Castillo's glove as he went to tag Turner, who slid headfirst into the bag. After Smith flied out and Edwin Rios struck out, Justin Turner doubled to left-center, scoring Trea Turner with the tying run.

Chris Taylor, who entered as a defensive replacement in the seventh, followed with a bloop single to right-center, scoring Justin Turner and giving the Dodgers a 5-4 lead.

"I came in the dugout incredibly frustrated," said Bednar, who was asked to go back out in the ninth. "I just had to flush it really quick."

Tucupita Marcano hit a three-run homer, his first in the majors, in the second inning off Walker Buehler to give the Pirates a 3-0 lead.

They made it 4-0 in the third with a solo shot by Bryan Reynolds on the first pitch from Buehler.

Pirates starter Zach Thompson allowed two runs and four hits in 5 2/3 innings. The right-hander struck out four and walked one.

The Dodgers had the potential tying and go-ahead runs in scoring position in the seventh. With two outs, Hanser Alberto reached on an infield single to shortstop off reliever Dillon Peters. He walked Betts before Freeman hit a chopper to Peters, who threw underhand to first to end the threat.

The Dodgers trailed 4-2 in the fifth after consecutive two-out homers by Alberto and Betts. It was the third time this season the team homered back-to-back. Edwin Rios' solo homer in the sixth got them to 4-3.

Buehler gave up four runs and seven hits in six innings. He struck out seven and walked one.

Dodgers: OF Cody Bellinger was removed from the lineup before the game with left leg tightness. Kevin Pillar started in center field. ... LHP Clayton Kershaw (pelvis) threw a 35-pitch bullpen. "He was outstanding," manager Dave Roberts said. Kershaw will throw another bullpen in a few days and go on a rehab assignment. ... LHP Andrew Heaney (shoulder discomfort) threw a 35-pitch simulated game. He'll throw a side session this week before going on a rehab assignment Friday. ... 1B Max Muncy (left elbow inflammation) will return to the team's spring training site in Arizona later this week. He didn't swing a bat during the four-game series against the Diamondbacks. "We don't want to put a (recovery) time on him," Roberts said.

Infielder Yu Chang was acquired from Cleveland for cash and added to the active roster before the game. To make room for Chang, infielder-outfielder Hoy Park was optioned to Triple-A Indianapolis.

Pirates: RHP Mitch Keller (1-5, 6.05 ERA) has struggled with consistency this season, especially in the first inning when he's been hit hard.

Dodgers: LHP Julio Urias (3-4, 2.49 ERA) faced the Pirates for the first time in his career earlier this month, allowing two runs and 11 hits in six innings.