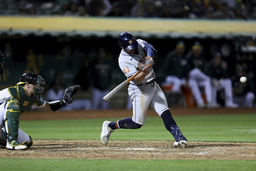 OAKLAND, Calif. (AP) Chas McCormick hit a tiebreaking home run off Frankie Montas to begin the eighth inning and the Houston Astros got a scoreless effort from their bullpen, beating the Oakland Athletics 3-1 on Tuesday night.

McCormick was in a 2 for 23 funk but snapped out of it with his second three-hit game of the season. He also had an RBI single in the fifth.

"I faced him a couple times last year so I kind of knew what his ball does," said McCormick, who was 3 for 6 lifetime against Montas before his big night. "I felt pretty comfortable. I just missed a couple pitches before then I kind of made an adjustment. Wanted to be a little shorter to the ball and then he threw me a fastball and I put a good swing on it."

That was enough on a night when five Houston relievers combined for five scoreless innings of four-hit ball after starter Cristian Javier departed after throwing 85 pitches in four innings.

The Astros entered the night with a 2.48 bullpen ERA, lowest in the majors.

Houston had a deep bullpen after Framber Valdez pitched a two-hitter in the series opener Monday.

"They have to be fresh, that's the secret," Astros manager Dusty Baker said. "A fresh arm is a good arm. Last night, Framber put us in a position to have a fresh bullpen today."

After McCormick hit a 2-2 pitch from Montas to deep center to put Houston ahead 2-1, the Astros drew four consecutive walks off Zach Jackson to force in another run.

Montas (2-5) struck out five in seven innings but remained winless since April 18. He allowed seven hits and two runs.

The A's have scored one run or fewer in six of Montas' last eight starts.

Umpires were forced to call for a replay review on the count in the first inning following the fourth pitch to Houston No. 2 hitter Michael Brantley. Confusion apparently arose around the second pitch of the game, a 96 mph sinker on the outside which home plate umpire Manny Gonzalez called a ball before using his right hand to slightly adjust his facemask, which some mistook for a strike call. When the count got to 3-1, A's manager Mark Kotsay came out and questioned Gonzalez. After a brief conversation with crew chief CB Bucknor, the New York replay center was notified and the 3-1 count was confirmed.

Astros: Jose Altuve went 0 for 3 with a walk after coming out of Monday's game following a collision with Oakland 1B Christian Bethancourt.

Athletics: 3B Kevin Smith was held out with a knee contusion.