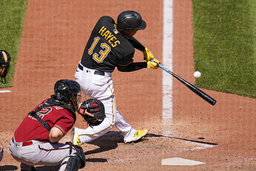 The rookie has at least one hit in his past five games, and was 7 for 12 this series. Suwinski hit a two-run blast in the bottom of the ninth Saturday, giving the Pirates a 2-1 win, after going 3 for 4 on Friday.

Pittsburgh took two of three from Arizona after a three-game sweep of the Dodgers in Los Angeles.

Pirates starter Zach Thompson (3-4) allowed four hits and two walks with four strikeouts. The right-hander has surrendered seven runs in 29 2/3 innings over his past six starts.

David Bednar had two strikeouts in a perfect ninth for his 10th save.

Cal Mitchell started the fifth inning with with his first major-league home run, sending Zac Gallen's cutter 370 feet over the Clemente Wall in right field and putting the Pirates up 1-0.

Suwinski stole third with one out in the sixth after his second double of the day and went home on a sac fly, extending the 2-0, before a bloop single from Ke'Bryan Hayes plated Tyler Heineman for the final run in the seventh.

Diamondbacks second baseman Ketel Marte had his 16-game hitting streak end, going 0 for 4 with one strikeout.

Diamondbacks: INF Cole Tucker was claimed off waivers from the Pirates and optioned to Triple-A Reno. . RHP Jacob Webb was designated for assignment.

Pirates: OF Travis Swaggerty, Pittsburgh's first-round pick in 2018 (No. 10 overall), was recalled from Triple-A Indianapolis. . INF Rodolfo Castro was optioned to Indianapolis, making room for Swaggerty.

Pirates RHP Heath Hembree threw a live bullpen Sunday. He last pitched May 20 because of a right calf strain.

Diamondbacks: LHP Madison Bumgarner (2-4, 3.31 ERA) is expected to start Monday for the first of a four-game series against the Cincinnati Reds. Bumgarner has allowed a combined 14 earned runs in his past five starts (0-3) since giving up six in his first seven this season (2-1).

Pirates: LHP Jose Quintana (1-2, 2.32) will take the mound Tuesday for the first of a two-game set against the Detroit Tigers. He has surrendered more than two earned runs once in 10 starts.