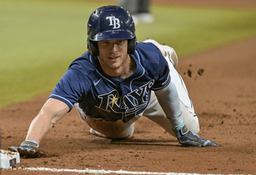 ST. PETERSBURG, Fla. (AP) Gerrit Cole took a no-hit bid into the eighth inning, Aaron Hicks hit a tiebreaking triple in the ninth as Manuel Margot slammed into the right-field wall and the New York Yankees beat the Tampa Bay Rays 4-2 on Monday night for their 50th win.

New York has won 17 of its last 19 games, and its 50-17 start is the best in the major leagues since the 2001 Seattle Mariners. The Yankees opened a 12-game lead over second-place Toronto and Tampa Bay dropped into fourth, 14 games back in the AL East.

"For us to answer back like that just shows what this team's about," said Aaron Judge, who went 0 for 3 with a walk. "We don't just live or die by the long ball. We're just a good all-around team."

Cole struck out 12 and walked three, allowing one run and one hit in 7 1/3 innings. Cole struck out six in a row at one point and led 2-0 when Isaac Paredes led off the eighth by grounding a slider on Cole's 105th pitch off the mound and into center field. On June 3, Cole pitched 6 2/3 perfect innings at Detroit.

"Any time you get to the eighth inning, you're starting to smell it and it gets close. But once (the no-hitter) goes by the wayside and it'a tie game, it's right back to: `Let's go find a way to get this thing done," Yankees manager Aaron Boone made. "Just a good resilient victory and a lot of good things that helped us get there."

Judge didn't realize Cole was flirting with a no-hitter until the sixth inning.

"He was just cruising. I guess it was just a normal Cole day," Judge said. "He had all his pitches working tonight. Just to be able to use all those pitches in any count, in any situation, is pretty impressive."

Anthony Rizzo hit a first-inning home run off Shane McClanahan, and the Yankees got a run in the seventh on an error by first baseman Ji-Man Choi, the major league-high 45th unearned run allowed by the Rays.

With the score 2-2, Josh Donaldson singled off Jason Adam (0-2) with one out in the ninth and Hicks, batting .321 in June, drove a hanging changeup high off the right-field wall. Margot fell to the field as center fielder Brett Phillips retrieved the ball and Donaldson scored. Cash and an athletic trainer went out to Margot, who had a sprained knee and left the field on a cart.

Wandy Peralta pitched the ninth for his second save, and the Yankees improved to 6-2 against the Rays this season, striking out Josh Lowe with two on and retiring Francisco Mejia on a flyout.

After Paredes singled off a clearly deflated Cole, Lowe flied out to Judge against the center field wall, and Holmes relieved.

"I thought I had good stuff," Cole said. "I've never thrown a no-hitter, so I can't tell you what no-hit stuff looks like."

"His numbers are pretty crazy. I think he'll get it one day," Holmes said.

(backslash)Mejia doubled down the right-field line and Yandy Diaz hit a soft bouncer to Holmes, who threw to first for the out as only the second of 13 runners he inherited this season scored.

Margot hit a bouncer to the third-base side, and Holmes' throw to first was off line and not in time as Margot reached with a single and Mejia scored to tie it 2-2.

Rizzo hit his 19th home run this season and became just the second left-handed batter to homer off McClanahan this year after Seattle's Jesse Winker.

Jack Acker holds the Yankees record of a 33-inning scoreless streak in 1969.

Yankees: SS Isiah Kiner-Falefa missed his second straight game because of a injured left hamstring. ... RHP Domingo German (sidelined since spring training with right shoulder impingement) is to make his first rehab appearance on Wednesday with Class A Tampa ... LHP Zack Britton (Tommy John surgery last Sept. 9) is to throw a bullpen session on Tuesday at the Yankees' minor league complex in Tampa along and LHP Aroldis Chapman (last pitched May 22 due to left Achilles tendinitis) is to throw batting practice. ... Jonathan Loaisiga (right shoulder inflammation) threw on flat ground at Tropicana Field.

Rays: CF Kevin Kiermaier left after two innings with left hip inflammation and is expected to go on the IL. ... SS Wander Franco (right quadriceps strain) played shortstop Monday night in his second rehab start for Class A Port Charlotte. He struck out against rehabbing Chris Sale of Boston, then doubled. ... RHP Andrew Kittredge is scheduled for Tommy John surgery on Wednesday.

LHP Nestor Cortes (6-2, 1.94) will make his third start of the season against the Rays on Tuesday night against an unnamed starter. Cortes gave up one run on four hits in eight innings in a 7-2 win at Tropicana Field on May 26.