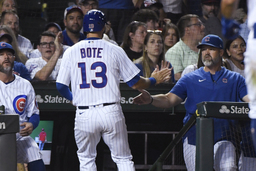 CHICAGO (AP) Luis Castillo hears all the trade rumors. He just doesn't pay much attention to them.

"I'm still trying to go out there and give it all, my best, as well," Castillo said through a translator.

The right-hander struck out 11 over six shutout innings in his first win in a month, leading the Cincinnati Reds to a 5-3 victory over Keegan Thompson and the Chicago Cubs.

Castillo (3-4) allowed five hits and walked three while throwing a career-high 123 pitches. One of the top players on the market ahead of the Aug. 2 trade deadline, Castillo had gone 0-2 with a 4.07 ERA in four starts since his last win May 31 at Boston.

"This sport is a business, obviously, and there's only so much that I can control," he said. "So I try to keep a clear mind and focus on the job at hand.

"Whatever happens, happens. If something happens, OK, then we'll just roll with it, we'll go with it."

Jonathan India hit a three-run homer for Cincinnati in the opener of a three-game series between the worst teams in the not-very-good NL Central. India returned to the starting lineup after missing Sunday's 10-3 win at San Francisco in a precautionary move after he was hit on the wrist by a pitch.

The Cubs scored three runs in the seventh, helped by a misplay by center fielder Nick Senzel and right fielder Albert Almora Jr. that handed an RBI double to Christopher Morel. Art Warren worked the eighth and Hunter Strickland got three outs for his fourth save.

Thompson (7-3) matched Castillo all the way to the sixth, when the last-place Reds grabbed a 2-0 lead on consecutive RBI doubles by Brandon Drury and Donovan Solano.

The Cubs (28-46) loaded the bases in the bottom half, but Castillo escaped the jam when he retired Yan Gomes on a fly ball to left on the ninth pitch of the at-bat. Castillo clapped into his glove as he left the mound after the final out.

"He just stayed after it," Reds manager David Bell said. "It just says so much about Luis."

The Reds (26-47) chased Thompson in the seventh, and India hit a 421-foot drive to center against Rowan Wick with two out. It was the second homer of the season for the 2021 NL Rookie of the Year.

Thompson was charged with four runs and eight hits in a career-high 6 1/3 innings. The right-hander struck out eight and walked none.

"I felt good tonight," he said. "But late, I got maybe a little tired there. But I got to find a way to dig down and make those pitches there at the end and get through that inning."

NOT BAD AT ALL

Nico Hoerner went 3 for 4 for the Cubs in his fifth consecutive multi-hit game. He became the first player with such a streak for Chicago since Jon Jay in September 2017.

Papierski was claimed off waivers from San Francisco on Saturday.

The Reds also said infielder Colin Moran cleared waivers and was outrighted to Louisville. He could decline the assignment and become a free agent.

Reds: OF Tommy Pham was scratched because of low back stiffness. Max Schrock replaced Pham in left field.

Cubs: RHP Marcus Stroman (shoulder inflammation) and LHP Drew Smyly (right oblique strain) each threw two innings of live BP. OF Seiya Suzuki (finger sprain) and 2B Nick Madrigal (left groin strain) were the hitters for the sessions. Stroman threw 36 pitches, and Smyly finished with 32. Manager David Ross said Suzuki could go out on a minor league rehab assignment as soon as Wednesday if he feels good after the workout. ... LHP Wade Miley (shoulder strain) played catch. ... OF Jason Heyward is being treated for right knee soreness. He will be reevaluated in the next couple days.