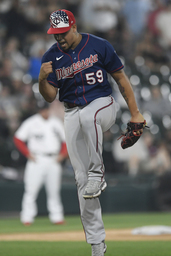 Arraez's leadoff grounder against Joe Kelly (0-2) drove in pinch-runner Gilberto Celestino. Jorge Polanco added a sacrifice fly, and Alex Kirilloff made it 6-2 with a two-run single.

Kelly hurt himself with two consecutive walks ahead of Polanco's fly ball to left. Manager Tony La Russa was thrown out by plate umpire David Rackley as the 10th fell apart for the White Sox.

"He's a better umpire than today and in a close game like that, that's a potential difference maker," La Russa said. "But when you get beat, you get beat. You don't blame the umpire. He made it tougher for us, but we still had a chance to win."

Chicago also ran itself into a triple play with an embarrassing baserunning display in the seventh.

The AL Central contenders faced off hours after a gunman opened fire on an Independence Day parade in suburban Chicago, killing at least six people. The White Sox talked to Major League Baseball about postponing the game, but it went on as scheduled.

The postgame fireworks show was canceled, and a moment of silence was observed before the first pitch.

The division-leading Twins (46-37) won for the third time in four games. The White Sox (38-40), who played the first of 19 consecutive games against AL Central opponents, had won three in a row. They missed a chance to reach the .500 mark for the first time since June 21.

Emilio Pagan (3-3) got three outs for the win. Jhoan Duran allowed AJ Pollock's RBI single in the 10th before closing it out, striking out Tim Anderson with runners on the corners on his final pitch.

Arraez hiked his major league-leading batting average to .348 and extended his hitting streak against the White Sox to 13 games. He is batting .429 (21 for 49) against the Sox since the streak started on June 5, 2021.

"I bet a lot of baseball people would pick Luis Arraez as the guy to come up with a guy on second and the game on the line," Twins manager Rocco Baldelli said.

Chicago trailed 2-1 before Yoan Moncada singled home Jose Abreu in the seventh. With pinch-runner Adam Engel on second and Moncada on first, Pollock hit a deep drive to center that Buxton tracked down with an over-the-shoulder catch.

Engel and Moncada were running as Buxton brought in the ball. The Gold Glove-winning center fielder then threw quickly to third baseman Gio Urshela, who tagged Moncada between second and third and stepped on second to complete the Twins' first triple play since June 6, 2021, at Kansas City.

"This was the weirdest one," Urshela said.

"I had no idea what was going on," Baldelli said. "I thought we got one out. And (Buxton) turned and fired it in. And as soon as he fired it in, I saw there was some commotion on the bases. I wasn't even sure who was where and who was trying to get back and what base they started."

Buxton also went deep, hitting a two-run homer against Johnny Cueto in the fifth. Buxton extended his hitting streak against the Sox to 10 games, during which he's batting ,488 (19 for 37) with eight homers and 15 RBIs.

The White Sox had grabbed a 1-0 lead on Abreu's homer off Dylan Bundy in the second. It was Abreu's team-high 10th on the season.

White Sox closer Liam Hendriks, who was activated from the 15-day injured list after being sidelined since June 11 due to a right forearm strain, struck out the side in the eighth. Hendricks' fastball topped out at 97 mph.

Twins: RHP Trevor Megill (shoulder impingement) was reinstated from the 15-day injured list. RHP Juan Minaya was designated for assignment. RHP Tyler Thornburg cleared waivers and has 48 hours to accept a minor league assignment or refuse it and become a free agent.

White Sox: Engel was reinstated from the 10-day IL. OF Adam Haseley and RHP Jimmy Lambert were optioned to Triple-A Charlotte.

White Sox: OF Eloy Jimenez (hamstring tear) could rejoin the team by the end of the week. "It's closer," La Russa said of Jimenez, who went 2 for 4 and played the entire game in left field for Charlotte in a 6-3 loss at Gwinnett. . C Yasmani Grandal (back spasms) will resume running the bases Tuesday, but there is no time frame for his return, La Russa said.