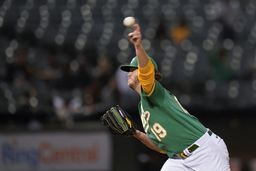 OAKLAND, Calif. (AP) A couple of weeks back, Athletics catcher Stephen Vogt noticed Cole Irvin struggling in the early innings, so the veteran spoke up and shared a little something Madison Bumgarner does just before taking the mound: The big lefty throws his last five or 10 pitches as hard as he can.

Irvin is now doing just that thanks to Vogt's insight, and what a difference it's making.

Irvin struck out eight and didn't allow an earned run over seven sparkling innings for his first back-to-back wins this year, and Oakland beat the Texas Rangers 5-4 Friday night.

MadBum might fire 10 pitches at top effort, Irvin will stick to five to conserve some energy for his outing.

"I kind of applied that to my pregame routine. Tried it out my last start, I liked it, tried it this start, I liked it again, so I think it's going to be part of it for the next start, too," Irvin said. "... That's what's great about this game, is you can never stop learning."

Ramon Laureano hit a go-ahead homer on a full-count with two out in the fifth, then Seth Brown added a two-run drive later that inning for the A's against Texas right-hander Spencer Howard (1-2).

Irvin (5-7) retired the initial nine Rangers batters in order before Marcus Semien's leadoff single in the fourth against his former club. Adolis Garcia hit a tying RBI single three batters later - then he was thrown out on the bases.

Irvin, who gave up three hits, exited to a warm ovation after allowing his lone walk of the night to Leody Taveras to begin the eighth. Nathaniel Lowe homered in the ninth and Josh Smith hit an RBI single as the Rangers threatened against closer Lou Trivino, who was pulled for A.J. Puk with two outs.

Puk hit Kole Calhoun to load the bases before getting Semien to ground out, earning his first save.

Vogt provided a pinch-hit insurance RBI single in the eighth for Oakland - and is happy to know he helped Irvin.

"I've been fortunate to see a lot so I love sharing anything I can to help," he said.

Corey Seager went 0 for 4 with three left on base to have his 10-game hitting streak snapped for the Rangers, who missed a chance to win consecutive games in July for just the second time after last doing so July 8-9 against the Twins.

Both teams had a long day coming into the game.

Texas played at Miami on Thursday and won 8-0 before a cross-country flight, while the A's split a home doubleheader with Detroit.

Seager traveled to South Florida but got a breather after taking part in the Home Run Derby and All-Star Game in Los Angeles.

The Rangers have won seven of 11 from the A's this season, their best record against any divisional opponent.

Rangers manager Chris Woodward chatted with Cuban outfielder Garcia about his approach for the remainder of the season. Garcia was the designated hitter Friday after coming in hitting .148 with 25 strikeouts over 15 games in July, though he snapped an 18-game stretch without a home run on Thursday's two-run drive.

"This is a big second half for him," Woodward said. "I desperately as a manager want him to be the answer. I want him to be the first guy we talk about as far as him being a winning piece to this organization. Because I just love the way the guy plays, the heart that he plays with, the way he plays outfield, the way he runs the bases, the way he cares about this team. I really challenged him."

Rangers: RHP Dane Dunning struck out nine over five innings in a rehab outing Thursday in Arizona, allowing three hits and two earned runs with a walk. He rejoined the team in Oakland and is eligible to be activated from the injured list Monday after being sidelined by a right ankle impingement. He is penciled in to start Tuesday at Seattle.

Athletics: RHP Dany Jimenez, who went on the 15-day injured list June 21 with a strained pitching shoulder, is set to throw a 25-pitch bullpen session Saturday, with the plan for him to face A's hitters Tuesday. ... RHP Frankie Montas reported "normal soreness" from his three-inning start Thursday against Detroit after missing two starts with inflammation in his pitching shoulder. "Frankie should be ready to go," manager Mark Kotsay said.

LHP Taylor Hearn (4-6, 5.78 ERA) pitches the middle game of the series Saturday having made quality starts his last two times against the A's. Oakland counters with RHP James Kaprielian (1-5, 5.09), making his third start of the year vs. Texas but yet to notch a decision.