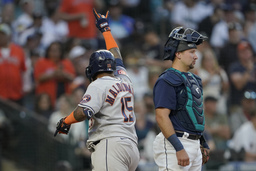 Seattle scratched breakout rookie Julio Rodriguez from the lineup moments before first pitch with left wrist soreness, then lost their first game since July 1. The club was one win shy of matching the 2001 Mariners for the longest winning streak in franchise history.

"The crowd was into it," Astros manager Dusty Baker said. "They were trying to urge them on for No. 15. But I'm just glad that we held on and won the game."

Altuve led off the game with a homer against starter Marco Gonzales, Alvarez added another solo shot in the fourth, his 28th of the year, and Martin Maldonado connected in the fifth for a 3-0 lead.

Alvarez scored Altuve with a sacrifice fly later in the fifth, and Jake Myers had an RBI single in the sixth for a 5-0 advantage.

Gonzales (5-10) was charged with all five runs over 5 2/3 innings, with nine hits allowed.

Ty France hit a solo homer for Seattle in the sixth inning against Jose Urquidy (9-4).

Baker was happy to get six innings out of Urquidy against the Mariners, who had already beaten him three times this season.

In his last start against Seattle on June 8, Urquidy allowed seven hits and five runs over 4 1/3 innings in a 5-3 loss.

"He gave us six innings, and it didn't look like it there for a while, because his pitch count got kind of high," Baker said. "So yeah, that was big for Urquidy and us."

Eugenio Suarez drew a bases-loaded walk in the eighth to pull the Mariners within three, but shortstop Jeremy Pena made a leaping grab to take away a hit from Kyle Lewis, and Houston pitcher Ryne Stanek struck out Cal Raleigh to end the threat.

"I thought, `He has no chance,'" Altuve said of Pena's leaping grab. "I think that was the play of the game. If that ball goes through, it's probably a different story."

The Mariners left nine runners on base.

"Tonight was a ton of intensity," Seattle manager Scott Servais said. "I loved our at-bats throughout the course of the game. We put a ton of pressure on them, we just couldn't quite get the big hit."

The 21-year-old Rodriguez was pulled from the lineup days after a breakout show at the All-Star Home Run Derby.

Servais said that Rodriguez jammed his wrist on a stolen base attempt against Texas on Sunday, and his status is day-to-day.

LEWIS UP, UPTON OUT

Seattle activated outfielder Kyle Lewis from the seven-day injured list after he recovered from a concussion and optioned outfielder Justin Upton to Triple-A. Upton refused the assignment and elected free agency.

Lewis was hit in the head by a pitch from Urquidy on May 28.

Mariners: OF Mitch Haniger (ankle) began a rehab assignment Friday with Class A Everett. Seattle placed Haniger on the IL on April 30, when he suffered a Grade 2 ankle sprain in a game against the Marlins. Haniger has played in just nine games this season.

Astros: OF Michael Brantley (shoulder) could start hitting this week, according Baker. Brantley was placed on the IL on June 28 with shoulder discomfort.

Astros RHP Justin Verlander faces Mariners RHP Logan Gilbert on Saturday. Verlander has an MLB-best 12 wins this season and a 1.89 ERA. Gilbert's most recent start came against Texas on July 16, when he allowed four hits and one earned run over five innings.