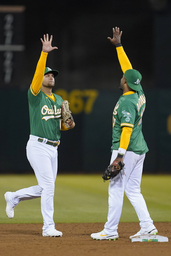 On a night when neither team did much offensively and both struggled defensively, the A's broke through after Rangers reliever Dennis Santana (3-6) walked the bases loaded on 16 pitches.

"Santana got in some trouble with his command there and we took advantage of it and it led to an inning where we got some runs," A's manager Mark Kotsay said. "Guys were trying to stay within themselves, stay in the zone and feed off each other. That was a good example of them doing that."

Machin added a sacrifice fly in the seventh despite a brilliant defensive play by Rangers left fielder Josh Smith, who made a sliding, backhand catch near the tarp in foul territory.

Two runs for the A's came after errors and were unearned. Texas committed three errors overall while Oakland made one.

"I feel like we've been playing better baseball," Machin said. "We're putting great at-bats together as a team - that's always a plus. Now we have momentum going in the second half. It's not how you start, it's how you finish."

Domingo Acevedo (3-2) pitched out a bases-loaded jam and retired four batters as the A's won their third straight to match their season high. Zach Jackson worked the ninth for his second save.

Lowe had two hits for Texas. Former A's star Marcus Semien had an RBI double. The Rangers have lost 14 of 20.

Texas loaded the bases with one out in the sixth after Kirby Snead gave up two hits and a walk. Acevedo replaced Snead and got pinch-hitter Charlie Culberson to ground into an inning-ending double play.

"That's how you win ballgames," A's starter James Kaprielian said. "That easily could have gone the other way."

Kaprielian pitched two-hit ball over five innings but has failed to make it past the sixth in 26 consecutive starts dating to July 10, 2021. It's the longest streak in franchise history. . The Rangers are 1-7 in games started by openers. . Semien was 1 for 5, ending his streak of three consecutive multi-hit games.

A's ball boy Johnny Thalblum - son of visiting clubhouse manager Mike Thalblum - brought the crowd of 10,190 to its feet when he made a diving catch of Adolis Garcia's foul ball in front of the Rangers bullpen in the eighth. The younger Thalblum made another nice catch later in the inning, prompting chants of "MVP! MVP!" from the crowd.

"If we can add another guy in the field, that'd be huge for us," Machin said with a grin. "I was looking to Elvis (Andrus) and we started laughing. It was fun. I hope he makes it to the (ESPN) top 10 tonight."

Rangers: Smith was hit by a pitch on his right wrist in the first inning but remained in the game.

Athletics: INF Jonah Bride (strained right shoulder) will continue a rehab assignment with Class A Stockton and could come off the injured list early next week.