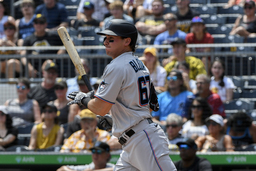 Fortes led off the 10th with a go-ahead single against closer David Bednar (3-4) and took second on a bobble by right fielder Cal Mitchell. Rojas drove him in two batters later with a single.

"Guys just hung in," Marlins manager Don Mattingly said. "Able to get a win today, which is good."

Jeff Brigham gave up a two-out, RBI single to Mitchell in the bottom half, then fanned Greg Allen to strand Ben Gamel at third for his second save in the majors and first since 2019.

"Hard-fought contest for a lot of innings, the whole way through," Mitchell said. "It is a tough loss for us. But we did a lot of things right and almost pulled it through. Just needed one more hit."

Miami let a 4-2 lead slip away in the ninth, when Yoshi Tsutsugo hit a two-run single off reliever Anthony Bass (2-3). Bass had not allowed a run in 17 straight appearances. An error by first baseman Jesus Aguilar set up the rally.

The Marlins took two of three from the Pirates after losing their previous four.

Miami ace Sandy Alcantara struck out 10 in six innings, allowing two runs and two hits and leaving with a 1.81 ERA. It was his first outing since striking out Giancarlo Stanton and Byron Buxton in a perfect inning during the All-Star Game.

"Today was the day that I competed the most," Alcantara said. "Today, it was so hot outside. Humid. That doesn't matter for me. I was able to compete and to lead. ... You just want to be able to go outside every fifth day, compete for my team, fighting for my team."

Alcantara has fanned 36 and permitted just four runs over 29 innings in his past four starts.

"It was a little bit of a battle for him," Mattingly said. "Early on, really good. It seemed like in the middle there, he was trying to force it. He's had a lot going on since his last start. He's flown to LA, pitched out there, come back. There's a lot that has gone on. But with all that happening, Sandy, obviously, is Sandy."

Aguilar gave Miami a 3-1 lead with a two-run single in the sixth off Pirates starter Mitch Keller.

Bryan De La Cruz hit his seventh home run for the Marlins. He stretched their lead to two with an RBI single in the ninth.

"We want to win," Allen said. "Regardless of how close we were, we didn't win today. There's only one emotion that we feel about that and that's probably frustrated we weren't able to come out on the other side of that. Sure, you can look at some positives. That's definitely what we'll take away, the positives of being able to battle back. ... But at the end of the day, we fell short. That's really all that matters."

PUT HIM ON THE BOARD

Marlins outfielder JJ Bleday picked up his first two hits in the majors, beating a throw from Cruz at short for a single before stealing second in the second inning and doubling in the ninth. Bleday, the No. 4 overall pick in 2019, made his first start after debuting in the seventh inning Saturday.

Marlins: RHP Max Meyer was placed on the 15-day injured list after the rookie left 10 pitches into his start Saturday with a right elbow sprain. . RHP Tommy Nance also was put on the 15-day IL because of a right groin strain. . INF Brian Anderson (left shoulder sprain) went on the 10-day IL.

Marlins: LHP Trevor Rogers (4-9, 5.46 ERA) will start Monday in the first of a four-game series against the Cincinnati Reds. He has lost his past three starts, giving up 10 runs (nine earned) in 16 innings.

Pirates: RHP JT Brubaker (2-8, 4.02) will take the mound Monday for the first of a two-game set at the Chicago Cubs. Brubaker tossed seven scoreless innings his last time out, allowing three hits and striking out nine with two walks in a 5-4 loss to the Marlins on July 13.