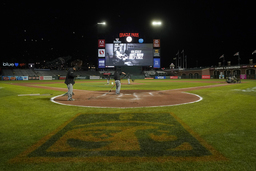 The Giants played a tribute on their video board after the final out at Oracle Park, the stadium where in October 2016 Scully broadcast the final game of his 67 seasons with the Dodgers. He died Tuesday at age 94.

"It was first-class by the Giants," Los Angeles manager Dave Roberts said. "After a big win, you feel good about it, but then you get presented with that. So it's sort of an emotional roller coaster and it was kind of a little subdued."

The Dodgers paused their usual post-win celebration to gaze at the video board.

"He was the best there ever was," three-time Cy Young Award winner Clayton Kershaw said. "When you think about the Dodgers, there's a lot of history here, and there are a lot of people who have come through. It's just a storied franchise all the way around. But it almost starts with Vin, honestly."

Fans of both the Dodgers and Giants stopped and applauded Scully before exiting Oracle Park.

"He was just a very unique, special human that the game of baseball was very lucky to have," Dodgers third baseman Justin Turner said.

Added Betts: "It's just a tremendous loss, not just for the Dodgers but baseball in general."

Los Angeles has won six straight over the Giants and improved the major leagues' best record to 70-33.

Joey Bart homered for San Francisco, which fell to 3-10 since the All-Star break. David Villar and Luis Gonzalez also drove in runs for the Giants.

"I thought (Bart) did a great job leading from behind the plate today," San Francisco manager Gabe Kapler said. "And obviously a big home run off Anderson and a nearly perfectly-executed drag bunt when we needed it in a major way. So it's a good step forward for Joey."

"It was great," Roberts said. "All that damage was done with two outs. It's big because our guys understand that when you can add on late, it changes how you use your pen. So not only winning tonight's game, but it gives us a chance to win tomorrow's game too."

Ahead of Tuesday's trade deadline, the Dodgers acquired OF Joey Gallo from the New York Yankees for minor league RHP Clayton Beeter.

RUF ON THE MOVE

The Giants assigned RHP Angel Rondon outright to Triple-A Sacramento and recalled LHP Alex Young, while RHP Tobias Myers was claimed off waivers by the Chicago White Sox and RHP Kervin Castro was claimed by the Cubs.

Giants: SS Brandon Crawford (left knee inflammation) began a rehab assignment at Triple-A Sacramento, going 0 for 1 with a walk. ... OF Joc Pederson and SS Thairo Estrada are both recovering well from concussions and expected to return when first eligible to come off the 7-day concussion injured list on Saturday and Monday, respectively.