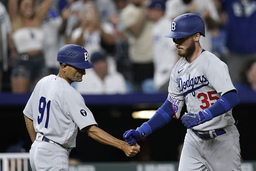 KANSAS CITY, Mo. (AP) Max Muncy had a homer and four RBIs, Mookie Betts hit his team-leading 26th home run and the Los Angeles Dodgers extended their winning streak to 12 games with a 13-3 win over the Kansas City Royals on Saturday night.

Muncy went 4 for 5, including his 14th homer of the season, a two-run shot to right field in the fourth inning. Betts led off the game with a homer as part of a five-run first inning.

"I think (Muncy) is just taking better at-bats and I don't think he is trying to hit every ball out of the ballpark," Dodgers' manager Dave Roberts said. "That is what got him to be Max Muncy, and he's hitting the ball hard, driving in runs, taking walks and tonight was a four-hit night so it was a good night for him."

The Dodgers' 12-game win streak is the third-longest in the majors this season. It is the first time since 1976 that Los Angeles has run off a dozen straight.

A season-high six Dodgers homered, including Joey Gallo, Cody Bellinger, Will Smith and Gavin Lux. Smith hit a two-run homer in the second and has hit safely in 10 of the last 11 games.

"We got ahead early and really made it tough on their starter and got to the bullpen," Smith said. "It is always nice to jump ahead and tack on a few more the next couple of innings and make it really hard for them to come back."

Brad Keller (6-13) gave up a career-high tying eight runs in three innings, with three strikeouts and three walks. It was the third time in Keller's career he allowed three home runs in an outing.

"You could tell when the first fastball came out of his hand, when it pulled to the left, but he never really got a good feel for it," Royals manager Mike Matheny said. "When he did, he caught the fastball over the plate and these guys will make you pay for it."

Michael Massey hit a two-run triple in the second and Brent Rooker hit an RBI double in the sixth in his first action with the Royals.

The Royals and Dodgers donned special uniforms in Kansas City's 28th annual Salute to the Negro Leagues game. Kansas City Monarchs legend Buck O'Neil was elected to the National Baseball Hall of Fame this summer. Los Angeles is also celebrating the 75th anniversary of Jackie Robinson's major league debut this season. Robinson was a member of the Monarchs in 1945.

Dodgers: Heaney (left arm contusion) was hit on a 106 mph comebacker by Bobby Witt Jr. in the third. He finished the inning before he was removed in the fourth.