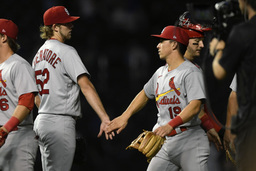 The NL Central-leading Cardinals got back on track in the nightcap with 16 hits. Tommy Edman had a solo homer, a double and three RBIs.

Dylan Carlson had a two-run triple as the Cardinals pulled away with six runs in the ninth. Chicago designated hitter Franmil Reyes came on for his first pitching appearance and hit pinch-hitter Albert Pujols with a 70 mph delivery, then got Paul Goldschmidt to hit into a double play and struck out Paul DeJong.

Jake Woodford (3-0) allowed one run on four hits in 5 1/3 innings in his first start this season.

"When the offense is rolling like that, you want to throw strikes, get quick outs and get them back in the dugout," Woodford said. "When this lineup's rolling, they're a force to be reckoned with."

Hitless in the opener, Arenado went 3-for-4 in the nightcap. The seven-time All-Star is 11 for his last 25.

Dickerson doubled twice and had an RBI. Brendan Donovan drove in two runs.

"There's a lot of good talent on this team, up and down the roster," Dickerson said. "Whoever gets to play that day is going to try to drive the bus and try to carry the team."

Chicago's Rafael Ortega and Reyes each had RBI doubles, and Nick Madrigal had two hits. The Cubs have dropped three of four following a five-game winning streak.

Arenado launched his 26th homer to Wrigley Field's left-center bleachers on the first pitch he saw in the fourth from Cubs starter Adrian Sampson (1-4) to end a 10-game longball drought.

O'Neill turned on a 1-0 slider and lined a two-run shot over the ivy in left for his eighth homer and second in 17 games.

O'Neill hit .286 with 34 homers in 2021, but has been hampered this season by left hamstring and right hand injuries. The outfielder is hitting .230 in 74 games.

"To see Tyler come in and contribute the way he did, that's going to be needed," Marmol said. "To see him step up today, that homer was big. He took some really good swings today."

In the opener, relievers Michael Rucker (3-1), Sean Newcomb, Erich Uelmen and Brandon Hughes allowed one hit over the final five innings. Hughes picked up his third save.

Nico Hoerner and Seiya Suzuki drove in runs off St. Louis starter Adam Wainwright (9-9) in the third. Rookie Christopher Morel had two hits for the Cubs.

The 25-year-old Assad was selected from Triple-A Iowa before the game. The right-hander allowed four hits, walked four and struck out three.

"Really nice debut for him," Chicago manager David Ross said. "He looked to be calm out there, pounding the strike zone."

Rucker relieved Assad with two on and none out in the fifth and Chicago ahead 2-0. He retired Paul Goldschmidt, Nolan Arenado and Nolan Gorman to end the threat, then pitched a 1-2-3 sixth.

Wainwright yielded two runs on five hits in six innings. Lars Nootbaar doubled twice but was thrown out at the plate in the first.

PUJOLS IN A PINCH

The Cardinals were already up 12-3 in the ninth of the nightcap when Reyes replaced Steven Brault on the mound. Then Pujols batted for Donovan.

"I think the fans wanted it," Marmol said. "He wanted it. He gets it."

Assad, a native of Tijuana, Mexico, joined the Cubs organization as an 18-year-old in 2016. His wife and parents were in the stands.

"I was 3 years old when he debuted," Assad said through a translator. "So I never imagined that I would have been facing him, let alone getting that strikeout."

Wainwright and catcher Yadier Molina, both 40, started their 321st game as batterymates in the opener. That's second only to Detroit's Mickey Lolich and Bill Freehan, who worked 324 together. Andrew Knizner was behind the plate in Game 2.

Chicago optioned RHP Kervin Castro to Triple-A Iowa and selected RHP Nicholas Padilla from the farm club as the 27th man for the doubleheader. Padilla made his major league debut in relief of Sampson in the nightcap. ... St. Louis added LHP Matthew Liberatore from Triple-A Memphis as its 27th man. The 22-year-old, rated as the Cardinals' top pitching prospect, allowed two runs in 2 2/3 innings in the nightcap.

Cardinals: Marmol said RHP Ryan Helsley will not return Wednesday. Helsley was placed on the paternity list on Friday, then moved to the restricted list on Monday.

Cubs: INF Patrick Wisdom (finger) returned to the lineup at first base in the nightcap. ... OF Jason Heyward (right knee inflammation) was transferred to the 60-day injured list. The five-time Gold Glove winner hasn't played since June 24.

Cardinals RHP Miles Mikolas (10-9, 3.32) is slated to start on Wednesday night. Chicago will counter with RHP Luke Farrell, who will be recalled from Iowa.