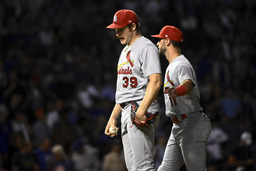 Nico Hoerner had three hits for Chicago, and Yan Gomes added two RBIs. Rowan Wick (4-6) got five outs for the win, leading a solid performance by the Cubs bullpen.

Lars Nootbaar homered for NL Central-leading St. Louis, and Corey Dickerson went 4 for 4. The Cardinals dropped to 17-5 in August.

Chicago and St. Louis split the first four games of their unusual five-game set. The series finale is Thursday afternoon.

Chicago was helped by a solid start from Luke Farrell, who pitched 4 1/3 innings of one-run ball in his first appearance for the Cubs since 2018. Farrell, the son of former Toronto and Boston manager John Farrell, was promoted from Triple-A Iowa before the game.

"My goal was to give us a chance to win and we ended up winning," Farrell said. "I worked my tail off to get back here and wanted to make the most of it."

Wick, Mark Leiter Jr., Brandon Hughes and Kervin Castro then shut out St. Louis the rest of the way. The Cardinals finished with nine hits, six of them coming against Farrell.

Chicago went ahead to stay with three runs in the second. Nelson Velazquez had an RBI double, and McKinstry drove in Gomes with a groundout.

McKinstry chased Miles Mikolas (10-10) with a two-run shot in the seventh. It was McKinstry's first homer since he was acquired in a July 30 trade with the Los Angeles Dodgers.

Mikolas was charged with three earned runs and six hits in 6 2/3 innings. He was 2-0 with a 1.69 ERA in his previous two starts.

Cardinals third baseman Nolan Arenado was ejected by umpire John Libka in the third for arguing a third-strike call. Arenado appeared ready to head to first before hopping in place to shout at Libka. Marmol thought the umpire was too quick to send the seven-time All Star off.

"There was no reason for an ejection," he said. "It impacts the game in the moment and then it impacts the rest of the game without having one of your best players on the field."

Chicago's Rafael Ortega laid down a dribbling bunt in the second that hugged the edge of the grass for about 70 feet while Mikolas and Arenado watched in hopes it would roll foul. It stayed fair, and Ortega got to first to load the bases.

Cardinals: Marmol said closer Ryan Helsley probably will not rejoin the team until Friday's series opener against Atlanta. The right-hander has been on paternity leave since Aug. 19.

Cubs: RHP Kyle Hendricks (shoulder strain) was moved to the 60-day injured list. He will not be back this season. ... LHP Steven Brault was placed on the 15-day IL with a shoulder strain. Castro was recalled from the minors. The Cubs also optioned RHP Anderson Espinoza to Triple-A Iowa.