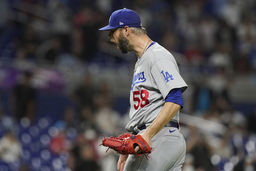 MIAMI (AP) Chris Martin has exceeded the Los Angeles Dodgers' expectations since they traded for him in late July.

The well-traveled reliever inherited a bases-loaded jam in the bottom of the 10th inning and got the final two outs as the NL-West leading Dodgers defeated the Miami Marlins 3-2 on Monday night.

"He came over here and just allowed us to poke holes or add to his mix and find out what plays best," Dodgers manager Dave Roberts said, "and he's just been all in, whether the location, the sequencing, what pitches he decides to use. He's been bought in from the get-go."

Freddie Freeman drove in the go-ahead run with a grounder in the top half of the inning.

Freeman hit a grounder to first baseman Charles Leblanc, who got a forceout at second as Bellinger scored. Freeman had two earlier hits and leads the majors with 163.

Jon Berti walked to lead off the bottom half against reliever Craig Kimbrel (4-5) and Brian Anderson reached on a fielder's choice, advancing automatic runner Joey Wendle to third. Kimbrel then walked JJ Bleday.

Martin relieved Kimbrel and struck out Garrett Cooper and retired Jacob Stallings on a popout to first for his first save since posting one for Atlanta last year.

"There's nothing like experiencing those situations," Martin said. "Obviously, the playoffs kind of help you with that in the regular season. But these games count, in my opinion, just as much. Just go out there and just compete every single pitch. That's all I try to do."

Now with his sixth big league team, the Dodgers got the 36-year-old right-hander from the Chicago Cubs for utilityman Zach McKinstry.

The Dodgers, with a major league-best 89 wins, took three of four in the series.

"You're going to have to win these games in the postseason," Turner said, "so a little bit of practice, a little bit of intensity and adrenaline - these last four games were pretty tough for the most part. They played us really well this series. We had to battle for these three wins."

The game had been tied since the fifth, when Lewin Diaz hit an RBI single for Miami to make it 2-2.

The Dodgers jumped ahead in the third after Will Smith hit a two-run shot over the center field for his 19th home run of the season. Smith, the Dodgers' All-Star catcher, was named to Team USA in the World Baseball Classic, which will be played in spring 2023. He is joining teammate Mookie Betts, who announced last week that he'll be on the team.

"As a kid, dreaming and seeing people put on the USA jersey, you hope that one day you'd be in that position and have that opportunity," Smith said.

Joey Wendle hit a leadoff double in the Miami first and later scored on Brian Anderson's groundout to give the Marlins a 1-0 lead.

Earlier in the day, the Dodgers placed All-Star pitcher Tony Gonsolin on the injured list because of a strained right forearm. Gonsolin has an NL-best 2.10 ERA and is tied with Houston's Justin Verlander and Atlanta's Kyle Wright for the most wins in the majors at 16.

Michael Grove was recalled from Triple-A Oklahoma City and started in Gonsolin's place. The right-hander allowed five hits, two runs, walked one and struck out four in 4 2/3 innings.

Diaz and Wendle had two hits for the Marlins, who were 1 for 13 with runners in scoring position.

"We had chances in the game to win it," Marlins manager Don Mattingly said, "but we just weren't able to get that hit to get us a run."

Betts, a six-time All-Star who homered in the first three games of the series, didn't start but came in as a defensive replacement in the 10th.

Berti halted the Dodgers' scoring threat in the first with a leaping catch at third base to rob Justin Turner of a base hit and keep the game scoreless.

Dodgers: LHP Clayton Kershaw (lower back soreness) threw a bullpen session on Monday and continues to improve toward a possible return later this week.

Marlins: INF Jazz Chisholm Jr. (right lower back strain) is completing core and lifting programs at the team's spring training complex in Jupiter, but has not started baseball activities.