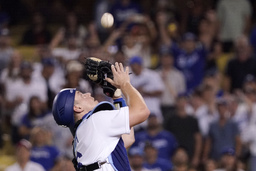 The NL West leaders reduced their magic number to seven and improved to 11-4 against their rival this season. All of the game's runs came on homers.

Muncy, who came in hitting .186, went 3 for 4 and drove in three runs, satisfied at how the ball came off his bat.

"Home runs are obviously amazing and I'm happy I hit them, but just seeing the ball fly at the path is better," he said. "I made a couple mechanical adjustments right before the game."

Tyler Anderson (14-3) allowed three runs and eight hits in seven innings. The left-hander struck out three and walked two. Craig Kimbrel pitched the ninth to earn his 22nd save.

Muncy doubled leading off the second and Justin Turner walked before Gallo's 408-foot shot to the right-field pavilion off Jarlin Garcia (1-4) put the Dodgers ahead, 3-1.

Gallo's bat had a small crack near the handle; he wasn't sure if it was already broken or broke on the swing.

Gallo was acquired a month ago after a disastrous stint with the New York Yankees. The two-time All-Star's homer was his fourth with the Dodgers and 16th overall. He made a nifty diving catch in left field that saved two potential runs and ended the second.

"I enjoy being here," he said. "The lineup we have takes a lot of pressure off. I'm just kind of here. Anybody can take over a game."

The Dodgers extended their lead to 5-1 on Muncy's two-out, two-run homer to the right-field pavilion on the first pitch from Garcia in the third.

Garcia gave up five runs and four hits in 1 2/3 innings. He struck out three and walked one.

Muncy went deep to the left-field pavilion against Dominic Leone leading off the sixth.

Lewis Brinson homered on the first pitch of the game and Brandon Crawford added a two-run shot in the sixth for the Giants, who had their four-game winning streak snapped a night after hitting five homers in a 7-4 victory.

Right-hander John Brebbia opened the bullpen game for the Giants, allowing one hit in one inning.

Giants: Reinstated C Joey Bart from seven-day concussion list for his start behind the plate.

He joins LA teammates Mookie Betts, Trea Turner and Will Smith who will represent the U.S. and Freddie Freeman, who'll play for Canada, during the event in March.

Urias represented his country as a teenager, but the WBC will be the first time he does so as a professional. The Mexican left-hander hoped to pitch in the 2017 WBC, but the Dodgers wanted to limit their top prospect's workload.

Giants: RHP Alex Cobb (5-6, 3.58 ERA) is enjoying a strong second half. He struck out seven against the Phillies in his last start.