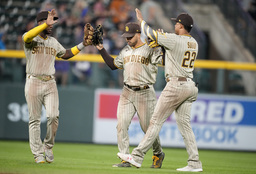 No panic that this just might be a long night at hitter friendly Coors Field. He just confidently made the adjustments like he's done all season.

Darvish settled in after surrendering a leadoff homer and earned his career-high-tying 16th win as the San Diego Padres climbed into second place in the NL wild-card race by beating the Colorado Rockies 9-3 on Saturday.

"Once again, he gives us a solid outing," Padres manager Bob Melvin said.

Jake Cronenworth and Ha-Seong Kim each had two-run singles as part of a six-run seventh that turned a 3-2 game into a rout. The Padres moved a half-game ahead of Philadelphia, with the surging Milwaukee Brewers just 1 1/2 games behind the Phillies for the third and final spot.

Darvish (16-7) struck out eight over six efficient innings to match the win total he set as a rookie with Texas in 2012. The reigning NL player of the week saw his stretch of 16 straight scoreless innings come to an end on his fourth pitch, when Ryan McMahon lined a split-finger over the fence in right.

The right-hander bounced right back into form to turn in his 24th quality start.

"It's one of the more fun seasons," Darvish said through a translator. "Really digging into what the hitters are trying to do and studying the hitters deeply. With that knowledge going into the game, it's been fun."

His preparation has been top-notch to Melvin.

"He's very curious. Always finding better ways to do things," Melvin explained. "For a guy who's pitched as well as he has over a long period of time in his career, to constantly try to get better, it's cool to watch."

Slumping center fielder Trent Grisham contributed with his glove in the fifth inning. His sliding, head-first snare of Randal Grichuk's two-out liner left divots in the grass - and saved the potential tying run from scoring.

"He's been playing Gold-Glove defense all year," Padres third baseman Manny Machado said. "Thing don't always go as you wish at the plate, but he goes out there and plays stellar defense every single time."

Melvin tweaked his batting order with his team in a mini two-game slump. He inserted Cronenworth into the cleanup spot and the move paid dividends. Cronenworth's RBI single in the third gave Darvish and the Padres a 2-1 lead.

It was a rare win for the Padres at Coors Field, where they're now 4-14 over the last two seasons.

"His stuff pretty consistently is good," Rockies manager Bud Black said of Kuhl. "He did his job in a lot of ways."

Grichuk homered in the eighth for Colorado. He spiked his bat into the ground soon after launching his 17th homer.

Rockies general manager Bill Schmidt mentioned health as a reason the Rockies will miss the postseason for a fourth straight season. More specifically, slugger Kris Bryant, who was limited to 42 games due to back soreness and plantar fasciitis.

TIP OF THE CAP

Cron caught the highlights of former teammate Albert Pujols hitting his 700th career homer. Cron learned quite a bit by watching Pujols as a younger player when they both were with Los Angeles Angels.

"If you know Albert you knew that (700-homer mark) is something he'd rise to the occasion to do," Cron said a day after Pujols went yard twice for St. Louis to reach the milestone.

Rockies shortstop Ezequiel Tovar went 1 for 4 with three strikeouts a day after becoming the team's youngest position player to make his major league debut. Tovar couldn't field Kim's chopper in the seventh that trickled into left field. It was ruled a hit.

The Rockies close out their home schedule Sunday with Denver native Kyle Freeland (9-10, 4.38 ERA) on the mound. The Padres will throw righty Mike Clevinger (6-7, 4.23).