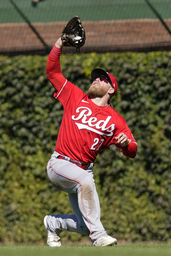 Sampson (4-5) gave up one run on three hits, struck out six and walked two in his 97-pitch outing. He matched his longest start of the season and extended his streak of allowing one run or fewer to five consecutive starts.

"It's all just working out for me," said Sampson, who improved to 3-1 in six September starts. "We're on a good roll."

He finished his day by getting Mike Siani to ground into a double play, stranding a runner at third.

"Sampson's definitely put himself in a position to be able to help us next year. I think he knows that and he pitches like that," Cubs manager David Ross said. "Really nice job of controlling the game today in and out."

Hoerner doubled in two runs in the Cubs' three-run second and brought home another run an inning later on a fielder's choice. The Cubs, fresh off a sweep of playoff hopeful Philadelphia, have won nine of 10.

Jake Fraley had three of the Reds' four hits, including his 12th homer in the second. Cincinnati has lost four straight and seven of eight.

Relievers Erich Uelmen and Rowan Wick completed the four-hitter for Chicago. Yan Gomes had two hits and an RBI.

"Just wasn't a good day all around for me," Ashcraft said.

Connor Overton spared the bullpen by pitching the remainder of the game, allowing two hits.

Reds: Siani was back in center field for his first action since leaving Tuesday's loss to Pittsburgh after attempting a diving catch.