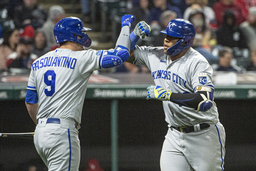 CLEVELAND (AP) Salvador Perez had four hits and drove in a pair of runs, Kris Bubic struck out a season-high eight and the Kansas City Royals beat the AL Central champion Cleveland Guardians 7-1 on Saturday night.

Perez collected three singles and a solo homer in four plate appearances, spoiling the return of Cleveland right-hander Zach Plesac (3-12) following a one-month stay on the injured list with a broken pitching hand.

The Guardians will host either Toronto, Seattle or Tampa Bay in a best-of-three wild-card series next weekend. Cleveland has won 10 of 12 and is an MLB-best 21-5 since Sept. 5.

"It was a hard night to evaluate Zach," Guardians manager Terry Francona said. "He wasn't in midseason form, but it's not fair to expect that to be the case. The good part was he feels like he can pitch without feeling like he's rehabbing."

Bubic (3-13) tossed five scoreless innings, allowing five hits, in snapping his career-long losing streak at seven. The left-hander had not won since July 24 against Tampa Bay, posting a 6.14 ERA over his previous 11 starts.

"They're a pretty smart lineup and don't strike out much, so it feels good to shut down a playoff team," Bubic said. "Finishing like this doesn't dismiss the rest of the year, but it gives a look at what could be in the future."

Plesac was activated to make his first start since punching the mound in anger on Aug. 27 in Seattle. He gave up four runs, one earned, in 3 2/3 innings and will work out of the bullpen going forward.

Owen Miller doubled home Oscar Gonzalez in the sixth to pull Cleveland within 5-1, but Perez homered off Kirk McCarty in the seventh and Melendez scored on a fielder's choice in the eighth for the Royals.

Perez's home run gave him 1,274 career hits, moving into eighth place in Royals history. He was removed from the game following the at-bat because of discomfort in his surgically repaired left thumb.

"Salvy is special," Kansas City manager Mike Matheny said. "He's one of the most unique players I've ever been around in my entire life. He actually got banged up on his third hit, but stayed in and hit the homer onto the porch."

Catcher Bo Naylor became the 17th Guardians player to make his major-league debut this season, equaling the franchise record set in 1912 and tied in 1914. He went 0 for 2 and threw out Isbel on an attempted steal of second.

Naylor's older brother, Josh, is Cleveland's primary first baseman. The last siblings with the franchise were Roberto and Sandy Alomar Jr. in 2000.

"We wanted to let the kid get some nerves out of the way tonight," Francona said.

The Guardians selected the contract of Naylor from Triple-A Columbus, adding a third catcher to their roster. Naylor batted .263 with 21 homers, 68 RBIs and 20 stolen bases in 118 games, split between the Clippers and Double-A Akron.

RHP Bryan Shaw, who was 6-2 with a 5.40 ERA in 60 games, was designated for assignment in a corresponding move. A longtime Francona favorite, Shaw is Cleveland's career leader with 517 relief appearances.

Guardians: 3B Gabriel Arias (right wrist bruise) was in the lineup and committed an error, one night after being hit by a Brady Singer pitch in the first inning. All-Star 3B Jose Ramirez was given the day off.

Royals: RHP Max Castillo (0-1, 4.98 ERA), acquired from Toronto as part of an Aug. 2 trade for Whit Merrifield, makes his fourth start with Kansas City. The rookie is 0-1 with a 3.43 ERA in six road appearances.