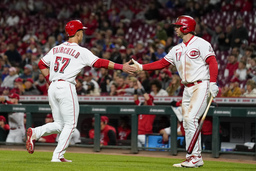 The Reds (61-99) snapped a six-game skid and can avoid losing at least 100 games for the second time in franchise history if they sweep the three-game series against Chicago. Cincinnati finished 61-101 in 1982.

Greene (5-13) and relievers Derek Law, Buck Farmer and Alexis Diaz combined on a two-hitter to stop the Cubs' winning streak at seven games.

"Hunter was great," Reds manager David Bell said. "The first couple innings, he threw more pitches than he wanted to, but then he settled in. Hunter dominated with his fastball and attacked the hitters."

Chicago only got one runner past second base before scoring under odd circumstances in the ninth against Diaz, who picked up his 10th save. The Cubs scored on a game-ending double play that wasn't completed until Esteban Quiroz, believing he was forced out, wandered off second base and was tagged. The official scorer announced the final score as 3-0 before correcting it.

Quiroz also was doubled off second base in the sixth on Seiya Suzuki's line drive to shortstop Jose Barrero.

"We have to make sure that we have the right information before we get off the bag," Cubs manager David Ross said.

Greene walked one and struck out eight while throwing 90 pitches, 65 for strikes, in his last start of the season. He also hit a batter. The rookie right-hander won for the first time in four starts since Aug. 1.

"I'm really excited to take things into the offseason," Greene said. "There is still a lot of work. I'm embracing that and can't wait for next year. I'm super proud of myself, and I have a lot of people in my corner."

"It still hasn't hit me the season is over."

"It's been crazy," he said. "September was long, but the year was short. It was a weird year."

Donovan Solano had two of Cincinnati's six hits as the Reds scored more than two runs for the second time in their last six games. They took a 2-0 lead in third as Jose Barrero scored from second on Wesneski's throwing error of TJ Friedl's slow roller up the first-base line and India scored from second on Kyle Farmer's blooper into short right field. Farmer's hit eluded the diving effort of first baseman Alfonso Riva, who knocked it far enough away for Farmer to leg out a double.

India added a run-scoring ground-rule double in the eighth against Manuel Rodriguez.

Greene went behind his back to knock down Christopher Morel's sharp one-hopper. Greene scrambled after the ball and underhanded it to first baseman Donovan Solano for the out.

The Cub's ninth-inning run was their first in the ninth or later since Aug. 28 at Milwaukee.

Reds: Friedl was helped off the field with a right hamstring injury after being thrown out trying to steal third base in the third inning.

Reds RHP Luis Cessa (4-4, 4.76 ERA) is scheduled to make his 10th start of the season after being moved from the bullpen to bolster an injury-plagued rotation. Cubs RHP Javier Assad (2-2, 3.62) allowed five hits over five scoreless innings in his last start on Thursday against the Phillies.