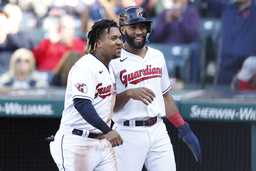 CLEVELAND (AP) Jose Ramirez drove in two runs and had four hits, Aaron Civale pitched six solid innings and the Cleveland Guardians defeated the Kansas City Royals 9-2 on Wednesday in their final tune-up for the postseason.

Cleveland opens the wild-card round against Tampa Bay on Friday at Progressive Field.

The AL Central champions are 24-6 since Sept. 5 and finished the regular season 92-70. The youngest team in baseball had 17 players make their major league debuts this season. Cleveland finished 80-82 last season.

Ramirez had run-scoring singles in the second and sixth, and ends the regular season with 126 RBIs. Ramirez doubled in the eighth and received a loud ovation from the 12,983 fans when he was removed for a pinch-runner.

The fact Ramirez hustled into second for a double in his final at-bat of the regular season with his team ahead by six runs came as no surprise.

"He's the heart and soul of the team and everyone would tell you that same thing," Civale said. "There's a lot of pieces involved, but he is that supreme piece. It's extremely fun to watch. It's great that we get to do it from the same dugout and not across the way."

Rookie Steven Kwan ended the regular season batting .298. His chance to hit .300 ended when he was hit by a pitch in the seventh.

"I thought it was fitting that Josey finished on a hustle double and Kwan, who's trying to hit .300, alerts the umpire that he gets hit because he's playing the game," manager Terry Francona said "That, to me, means we're going in a good direction. "

Civale (5-6) struck out nine and is 3-0 since returning from his third stint on the injured list. The right-hander gave up solo homers to Vinnie Pasquantino and Kyle Isbel. Civale will be Cleveland's starter in Game 1 of the AL Division Series, if the wild-card round goes three games.

Kansas City (65-97) finished last in the AL Central. The Royals were 74-88 last season. Kansas City hasn't reached the postseason since winning the World Series in 2015.

Five players drove in runs for the Guardians. Josh Naylor had three RBIs, including a two-run single when the Guardians scored four times in the first. Myles Straw had a sacrifice fly in the second and an RBI single in the seventh.

Rookie Will Brennan and Luke Maile also had RBIs in the first.

Pasquantino finished his rookie season with 10 home runs, while Isbel batted .308 over his final 11 games after snapping an 0-for-21 slump.

"Good for both of them, getting a little reward in a long year, do a little damage," said Matheny, who became the fifth big league manager to be fired this year.

TIME FOR THE PLAYOFFS

The last thing a postseason team needs is an injury in the final game of the regular season, but Andres Gimenez and Oscar Gonzalez caused the Guardians brief concern Wednesday.

Gimenez was hit by a pitch for an AL-leading 25th time this season in the fourth when he took one on the right knee. He limped out of the box, but stayed in the game after talking to manager Terry Francona and a team trainer.

Gonzalez's slide into third base got the attention of Cleveland's dugout in the first. After drawing a walk, he slid headfirst into the bag on Brennan's single to right, but appeared to land on his nose as he slid in safely.

Gonzalez stayed on the ground for a couple of moments as third base coach Mike Sarbaugh retrieved his helmet. Gonzalez slowly got to his feet and stayed in the game.

Royals: C Salvador Perez (left thumb soreness) missed the final four games of the six-game series. He had surgery on his thumb earlier this season and felt soreness during Saturday's game when he went 4 for 4. Perez homered in his final at-bat Saturday for his 1,274th career hit, passing Billy Butler for eighth place on the Royals' all-time list.

Guardians: RHP Shane Bieber (13-8, 2.88 ERA) will start Friday's series opener. He reached the 200-inning mark in his final regular-season start against Kansas City on Sunday. Bieber hasn't lost since Sept. 1 and is 5-0 over his last six starts. His only postseason start came in 2020, when he won the AL Cy Young Award, but was the losing pitcher in Game 1 of the Division Series against the New York Yankees. Bieber allowed seven runs and nine hits in 4 2/3 innings.