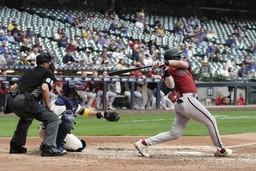 MILWAUKEE (AP) Josh Rojas and Corbin Carroll hit back-to-back home runs in the ninth inning and the Arizona Diamondbacks beat the Milwaukee Brewers 4-2 Wednesday to close out the season.

"He's had a great season," Brewers manager Craig Counsell said. "It's incredible, what he did to follow up a great season with another great season is to be commended and the mark of a great pitcher."

Along with his strikeout mark, Burnes went 12-8 to set a career high for wins. He also set personal marks with 33 starts and 21 quality starts while posting a 2.94 ERA and 0.97 WHIP, which were just slightly higher than a year ago.

"For me, the main thing is health," Burnes said. "Making 33 starts this year, going over 200 innings, that's just attributable to me being healthy, sticking to the routine between outings."

Arizona starter Merrill Kelly struck out seven over six innings as he surpassed the 200-inning mark for the first time in his career. He allowed one run and four hits.

"There's probably five pitchers that pitched 200 innings this year," Arizona manager Torey Lovullo said. "It's a statement about who he is as far as preparation, his ability to execute, rest and recover. He just wants to carry the team and put it on his shoulders. He deserved that opportunity to get that."

Rowdy Tellez hit his team-leading 35th home run, breaking a 1-1 tie with a solo drive in the Milwaukee eighth off Sean Poppen (2-2).

Christian Walker led off the Arizona ninth with his third hit and Rojas homered off Trevor Gott (3-3). Carroll followed with his fourth homer of the season.

Kevin Ginkel worked a perfect ninth for his first save.

"It was a great way to send us off into the offseason," Lovullo said. "A perfect way to end the season."

After losing 110 games to tie Baltimore for baseball's worst record a year ago, the Diamondbacks improved to 73-88 in 2022.

"We raised the bar in the right direction but we've still got work to do," Lovullo said.

Milwaukee finished 87-75, down from 95-67 last season, when the Brewers won the NL Central before falling to the eventual World Series champion Braves in the NL Division Series.

Lovullo said Smith would get tests Thursday and "we're keeping our fingers crossed."

With neither team advancing to the postseason, they'll return to game action on Feb. 25 when the Brewers host the Dodgers in spring training and Diamondbacks face the Rockies to open Cactus League play in Arizona.