Yankees lose finale in Texas without Judge, end with 99 Ws 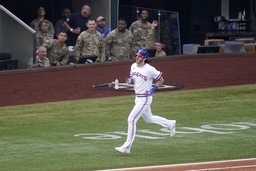 Their focus has already shifted to trying to win their 28th World Series title, and first since 2009.

"This is the fun part of the year," Judge said.

Judge was out of the lineup a day after hitting his American League record 62nd homer, and the Yankees lost their regular-season finale 4-2 against the Texas Rangers on Wednesday to finish with 99 wins. At the beginning of July, New York was on pace for 118 wins, four more than the franchise record set in 1998.

"AL East champs. I mean, that's what we hope for in the regular season. You know, we put ourselves in a good spot now. So I guess first mission accomplished in that regard," manager Aaron Boone said. "There's some satisfaction in that. But, you know, our group ... we want to win it all. And that's what we're focused on now."

Jose Trevino homered for the AL East champion Yankees (99-63), who missed a chance to reach 100 wins for the 22nd time and give the major leagues five 100-win teams for the first time. They get an extended break before opening the AL Division Series at home on Tuesday.

While Judge made his case to play in the regular-season finale, Boone insisted on a break for after the slugger played 55 consecutive games, and 157 overall, in the pursuit of Roger Maris' single-season home run mark that had stood since 1961.

Fans in the crowd of 28,056 chanted "We Want Judge! We Want Judge!" in the ninth inning, hoping to get to see him get a shot at one more homer.

"Not today. He got plenty of them all year," Boone said. "Hopefully, we've got a lot left now in the postseason."

Judge finished with a .311 batting average, second in the AL behind the .316 of Minnesota's Luis Arraez. Judge led the other Triple Crown categories with 62 homers and 131 RBIs.

Charlie Culberson and Jonah Heim homered for the Rangers (68-94), who wrapped up their sixth consecutive losing season. Texas was 17-31 after interim manager Tony Beasley took over Aug. 15, when fourth-year manager Chris Woodward was fired and two days before president of baseball operations and longtime general manager Jon Daniels was also let go.

Texas had lost seven games in a row before its 3-2 win in the second game of a doubleheader Tuesday night.

"It is good to be able to end on a winning note. Really we played a good series," Beasley said. " That was good for the guys to come out, compete until the end and not quit and not give up. ... That's a testament to the guys in that clubhouse and the character in the clubhouse and what they're made out of. So those are positive signs of moving forward."

Rangers rookie Glenn Otto (7-10) struck out five and walked two while allowing two runs and four hits over six innings. Matt Moore, the third Texas reliever, worked the ninth for his fifth save in six chances.

Trevino's solo homer in the fourth inning, his 11th overall but first in 40 games, put the Yankees up 2-1. Texas got even on Heim's 16th homer in the bottom half, then went ahead in the fifth when Bubba Thompson had an RBI double and scored on Marcus Semien's single.

Veteran utility player Culberson, who played for only the third time in the past 32 games, hit his second homer in the third.

Boone said the entire team got together after Tuesday night's game to celebrate Judge's 61st homer and Gerrit Cole's 257 strikeouts that broke Ron Guidry's franchise single-season record set in 1978, when he was 25-3 and won the AL Cy Young Award.

"Those two records to fall in probably 5, 7 minutes was crazy. It's unbelievable," said Boone, adding that the celebration included Guidry calling in to congratulate Cole, with the entire team able to hear and share in that.

Yankees: 2B Gleyber Torres missed the entire four-game series after being a late scratch from the starting lineup Monday for flu-like symptoms. Boone said Torres was feeling better and had no fever, but still was dealing with a sore throat and body aches. A COVID test came back negative.

The Yankees host play Cleveland or Tampa Bay in the ALDS. The Rangers will have a managerial search, and their next game is the 2023 season opener March 30 at home against Philadelphia.