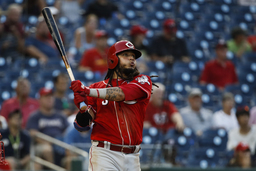 WASHINGTON (AP) It all started with Stephen Strasburg flicking his bat to reach for an outside cutter and loop a flare into right field for a tiebreaking RBI single.

With that, the Washington Nationals were on their way Wednesday - to a 10-run fifth inning that also featured homers by Anthony Rendon, Kurt Suzuki and Adam Eaton, followed by a six-run sixth.

Added up to a 17-7 victory for Washington over the Cincinnati Reds that completed a three-game sweep and put the Nationals 10 games over .500 for the first time since June 2018.

The Nationals, who lead the NL wild-card standings, got to Trevor Bauer for their biggest inning of the season, and the first time since they moved from Montreal in 2005 that every member of the lineup scored in a single frame. The initial run was plated thanks to Strasburg, who has six hits and seven RBIs in his past six outings.

"I don't think we expect anything less, anymore. Every time he comes up, we expect a hit with a ribbie. It's definitely nice when you can get that extra bat in the lineup," Suzuki said. "Everybody's thinking, `Oh, it's the pitcher; it's an out.' But not here."

The sixth Wednesday wasn't too shabby, either, as Washington batted around again, much to the delight of a crowd of 23,596 that showed up for the unusual 4:05 p.m. weekday start.

By the time that inning was done, the club's eight position players each had scored twice and the score was 17-4.

"The game can't go fast enough after that," Nationals manager Dave Martinez said. "You just hope that nobody gets hurt."

Eaton, who hit his eighth homer, and Rendon, who set a career high with his 26th, went deep back-to-back off Bauer (1-1), who only got one of the nine batters he faced in the fifth out. He was charged with a career-worst nine runs in 4 1/3 innings in his third appearance for the Reds since arriving from the Indians in a trade that sent Yasiel Puig to Cleveland.

"I gave up hits on all six of my pitch types that inning," noting that Strasburg connected on a cutter and Rendon on a curveball. "They got a hit on my changeup, slider, four-seam, two-seam. I don't know; it's kind of confusing when you're there. I don't know what else, short of throwing an eephus pitch or changing an arm angle. You're just trying to guess."

Suzuki's 13th homer, a two-run shot off reliever Sal Romano, made it 11-1 in the fifth.

Romano then got two outs and stuck around for the sixth, but he failed to retire anyone there and ended up charged with a total of eight runs. So his ERA ballooned from 3.00 to 13.50.

"Nice if we could do that every night," Suzuki said.

Strasburg (15-5), meanwhile, bounced back from throwing a trio of wild pitches in the fourth, including one that allowed Cincinnati's first run to score, making it 1-all.

He gave up four runs in 5 2/3 innings. One out after Tucker Barnhart homered in the sixth, Martinez went to the mound, but Strasburg talked his skipper out of lifting him.

"He didn't want to come out," Martinez said with a chuckle. "He wanted to finish the inning, so I just said, `Hey, you. All right. You got one more hitter. Let's go. This is it.'"

Strasburg then walked the next batter, and Martinez returned to yank him.

Javy Guerra worked the final three innings in relief and was credited with a save, despite allowing homers to Aristides Aquino in the seventh and Freddy Galvis in the ninth.

Aquino is the first player since at least 1900 with nine homers in his first 14 career games, according to the Elias Sports Bureau.

Reds: Bell said 2B Derek Dietrich (left shoulder) could need another week before he is activated and might go on a rehabilitation assignment before rejoining the Reds. Dietrich is eligible to return Thursday from the IL.

Nationals: RHP Max Scherzer (back muscle) says he is ready to come off the IL and pitch in the majors. Martinez did not rule out the possibility that Scherzer could pitch this weekend.

Nationals: After an off day, open a three-game home series Friday against Milwaukee, with LHP Patrick Corbin (9-5, 3.41) facing RHP Adrian Houser (5-5, 4.00). Washington has not announced its starting pitchers for Saturday and Sunday; one of those could go to Scherzer.