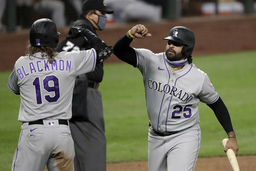 The division-leading Rockies picked up their fifth victory in six games against the AL West.

"I still don't think we're hitting on all cylinders. I think there's some guys who are swinging the bat well, (Blackmon) for one, (Murphy) is swinging well," Colorado manager Bud Black said. "But we get some other guys going I think you're gonna see some big numbers on offense."

Murphy's hit with two outs in the sixth ended the night for Seattle starter Yusei Kikuchi and gave Colorado a 4-1 lead. The inning was kept alive by Matt Kemp's double, despite getting fooled on the pitch from Kikuchi. Kemp reached for a pitch off the plate and dumped a double just inside the right field foul line to put runners at second and third with two outs.

Seattle allowed Kikuchi (0-1) to stay in for the lefty-on-lefty matchup against Murphy, but his slider caught too much of the plate and Murphy was able to beat the shift.

"(Murphy) can manipulate the bat head and I'm not sure he tried to do that, the pitch was in an area where he could use the center of the diamond, and he did, he got a base hit," Black said.

Colorado then feasted on Seattle's shaky bullpen. Hampson hit his first home run of the season with two outs in the seventh, and Blackmon led off the eighth with his third long ball. Blackmon had three hits and leads the National League with 22.

"I'm just trying to focus in the zone and not do too much," Blackmon said. "You don't have to take some incredible swing to hit a pitch if it's right down the middle. So that's kind of where I'm at right now, trying to hit pitches in the middle of the plate."

Murphy capped his night lining the first pitch from reliever Yohan Ramriez into the right-field seats with one out in the eighth.

"For sure we've been pitching really good. I just tried to make my best performance, giving everything I have," Senzatela said. "We got a win. That's most important right now."

Kikuchi allowed six hits and four runs in 5 2/3 innings. He threw six shutout innings in his previous start. Seattle manager Scott Servais said he thought Kikuchi's start against the Rockies was as good as his previous outing against Oakland.

"The final line really doesn't look that great, but I think he threw the ball really well," Servais said.

Rockies: Colorado placed RHP Chi Chi Gonzalez on the 10-day injured list with right biceps tendonitis. Gonzalez was slated to start the second game of the series on Saturday, but Black said Gonzalez remained in Denver to receive treatment. Black said Gonzalez felt some discomfort in the arm after his first start of the season last Monday.

Rockies: RHP Ryan Castellani was recalled from the alternate training site and will make his major league debut on Saturday night in place of Gonzalez. Castellani was 2-5 in 10 starts last season at Triple-A Albuquerque.

Mariners: LHP Nick Margevicius (0-0, 5.40) makes his first start stepping into the rotation after Kendall Graveman went on the 10-day injured list. Margevicius has made three appearances out of the bullpen earlier this season.