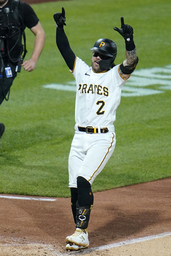 PITTSBURGH (AP) Adam Wainwright pitched seven innings of one-run ball to extend his domination of Pittsburgh, and battery-mate Yadier Molina keyed a four-run sixth inning with a two-run single as the St. Louis Cardinals beat the Pirates 5-3 on Friday night.

Wainwright has won 10 straight decisions against the Pirates and gone 19 starts since last losing to Pittsburgh in 2016, on opening day. He scattered four hits, walked three and struck out three while improving his lifetime record to 23-7 versus Pittsburgh.

"Sometimes you just feel comfortable against certain teams for whatever reason," Wainwright said. "Look at the Houston Astros and all the great teams they've had over the years, and I've had a lot of success against them. I have a 5 1/2 ERA against the Cincinnati Reds and they dominate me. I used to dominate them.

"The Pirates gave me problems early in my career. I could never get Freddy Sanchez out when he played here. It's a game of peaks and valleys, and you never can figure it out."

The Cardinals scored a run on a fielder's choice in the first inning, and broke it open in the sixth, extending their lead to 5-0. Molina's single to left field with the bases loaded was sandwiched between RBI singles by Dylan Carlson and Harrison Bader.

The Pirates cut the lead to 5-3 in the eighth on an RBI single by Bryan Reynolds and a run-producing grounder by Yoshi Tsutsugo. Giovanny Gallegos entered and struck out pinch-hitter Diego Castillo and Chavis with runners on the corners to end the threat.

Gallegos followed by striking out the side in order in the ninth for his eighth save in 10 opportunities. That came a day after he gave up a game-winning home run to the Mets' Pete Alonso in the 10th inning in New York.

"It was good to get him back out there," Cardinals manager Oliver Marmol said. "I talked to him during batting practice, and I could tell he really wanted to pitch. I knew he would bounce back."

Molina, Bader and Tommy Edman each had two of the Cardinals' 10 hits, which were all singles. Paul Goldschmidt extended his hitting streak to 13 games and on-base streak to 27.

Wainwright and Molina formed the Cardinals' battery for the 312th time in their careers. The major league record is 324 by Detroit's Mickey Lolich and Bill Freehan from 1963-75.

"I think in order to talk about how (Wainwright) pitches, I think you've got to acknowledge how Yadi calls the game and how well they work together," Chavis said. "They've been doing it for something like 40 years, so there are times where it almost seems like they're not even calling pitches. It seems like they're just on the same page and they roll through it. It's cool to watch it."

The Cardinals won after losing three times in a four-game series against the NL East-leading Mets.

Ke'Bryan Hayes and Chavis had two-hit games for the Pirates. Chavis' homer, his fourth, was the only extra-base hit in the game.

Zach Thompson (2-4) allowed one run and five hits in five innings with two strikeouts and a walk. He has lowered his ERA from 10.05 at the start of May to 4.60.

Second baseman Nolan Gorman and left-hander Matthew Liberatore joined the Cardinals from Triple-A Memphis prior to the game. Gorman was added to the active roster and made his major league debut, while Liberatore is scheduled to start Saturday in his first big league game.

Considered two of baseball's top prospects, Gorman hit .308 with 15 home runs in 34 games for Memphis, and Liberatore had a 3-3 record and 3.83 ERA in seven starts. Amazingly, they first met as 5-year-olds when they played on the same coach-pitch league team in the Phoenix area.

Gorman singled in his first at-bat and went 1 for 3 with a walk.

"I was definitely nervous when I went to get on the bus to come over here (to PNC Park), but it's the same game," Gorman said. "It's a fun game and it's great to be out here playing baseball."

Gorman said the team hotel was the biggest initial difference between the major leagues and minor leagues.

"It was a little different than that Fairfield Inn I was staying in last week," he said with a smile.

With Gorman taking over as the Cardinals' second baseman, Edman will become the regular shortstop. Edman was the NL Gold Glove second baseman last season.

"I'm excited for the opportunity and I'll be prepared," Edman said. "I'm very comfortable at both positions up the middle so it shouldn't be a difficult transition."

Cardinals: LF Tyler O'Neill (right shoulder impingement) was placed on the 10-day injured list. . RHP Jack Flaherty (right shoulder surgery) was transferred from the 10-day IL to the 60-day IL to open a spot on the 40-man roster for Gorman . C Andrew Knizner passed all his concussion tests a day after being removed from the game when he was twice struck on the mask with foul tips.

Cardinals: Liberatore was Tampa Bay's first-round draft pick in 2018 then traded to St. Louis following the 2019 season in a deal that included Randy Arozarena, who was the AL Rookie of the Year last season with the Rays.