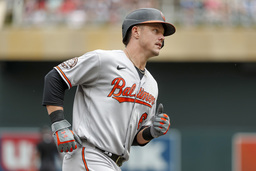 MINNEAPOLIS (AP) Tyler Wells took a no-hit bid into the fifth inning for the second straight start and won his sixth consecutive decision in leading the Baltimore Orioles over the Minnesota Twins 3-1 on Sunday.

Wells (7-4) struck out a career-high seven, allowing one run and three hits in six innings. He is 6-0 with a 1.89 ERA in seven starts since a May 25 loss at the New York Yankees.

The 27-year-old right-hander, taken by Baltimore from Minnesota in the 2020 winter meeting draft, has allowed one run or none in each of his last four starts.

"I think the fun part about it is playing against the guys that I came up with," Wells said. "I have a lot of really strong feelings for those guys. I care about them a lot. So, but to be able to go out there and compete against them is always fun."

Rougned Odor put Baltimore ahead when he led off the fifth inning with his eighth home run. Trey Mancini and Ryan Mountcastle homered on consecutive pitches in the sixth from Devin Smeltzer (4-2), who allowed six hits in six innings.

Smeltzer, who played with Wells in Double-A, has given up 10 home runs in last 32 1/3 innings after not allowing any in his first 24 innings.

"Some things are starting to click a little bit with the fastball," Smeltzer said. "It's been hit-or-miss on some of the carry with it this year. It's been a little bit down. We're working through some things, but I got some swings and misses on it today, so just got to keep on working."

Dillon Tate earned his second save of the season as the Orioles won the series finale after the Twins ended the first two games on walk-off hits.

"Our pitchers kept us in the ballgame today and really the entire homestand," Minnesota manager Rocco Baldelli said. "They gave us chances to win even when we didn't put runs up early. In those big moments, we came through a couple times."

Wells, who was a reliever last season, didn't allow a hit until Nick Gordon's double with one out in the fifth. The Twins scored in the sixth after Gilberto Celestino walked leading off the inning and came home on Jorge Polanco's single.

"Just seems like we're running out there on the field for a couple minutes and then just running back every time," Mountcastle said. "I love that. He's been pitching great, pounding the zone and attacking guys, which is huge."

Wells had missed two seasons due to Tommy John surgery when he was left unprotected by Minnesota in the winter meeting draft. He wasn't even Baltimore's first selection. The Orioles took right-hander Mac Sceroler in the first round.

"It's amazing, unbelievable, and he didn't pitch two years prior to that," Baltimore manager Brandon Hyde said. "What he did last year was unbelievable and now what he's doing this year is even more so. So, we're all excited about him."

Celestino made an error in the first, dropping a routine fly ball in center field. Later, he made a running catch in the gap to take away a hit in the third and threw out a runner at the plate in the fourth.

Odor dropped the ball on a transfer from his glove in the first for an error and followed with his homer to open the scoring.

Orioles: Mancini was in the lineup a day after being hit on the right elbow by a pitch on Saturday. Mancini has also been hit on each of his hands in recent weeks.

Twins: C Ryan Jeffers was feeling better and he was available if needed after sustaining a bruised right thumb in Friday's game and being held out Saturday. . RHP Trevor Megill (right shoulder impingement) struck out one and threw nine pitches in a perfect four innings for Triple-A St. Paul against Omaha on Saturday and is to rejoin the Twins on the upcoming trip.

Orioles: RHP Dean Kremer (2-1, 1.29 ERA) will start for Baltimore on Monday against Texas. The Orioles return home after a 10-game trip with Kremer, who has three straight scoreless starts with at least five innings. The Rangers are scheduled to start RHP Dane Dunning (1-6, 4.09).

Twins: Dylan Bundy (4-4, 4.71) will start the first game of three on the road against the Chicago White Sox. Bundy threw five scoreless innings in a start against Chicago on April 23. The White Sox have RHP Johnny Cueto (2-4, 3.33) lined up to start.