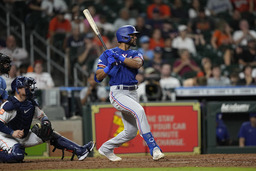 HOUSTON (AP) Leody Taveras drove in a career-high five runs, including a bases-clearing double as part of a five-run 10th inning as the Texas Rangers beat the Houston Astros 8-4 on Wednesday night.

Marcus Semien hit a bases-loaded sacrifice fly off Phil Maton (0-2) to put Texas ahead 4-3 in the 10th and Corey Seager followed with an RBI single.

The Rangers loaded the bases again on a single by Adolis Garcia, and two batters later, Taveras cleared them with a drive into the right-center gap.

"I think just his calmness, his ability to kind of like, `OK, I am going to navigate my way through these at bats every single game.' I'm proud of him," Texas manager Chris Woodward said. "He has come a long way in a short amount of time, and he's proven to us that I can't take him out of the lineup."

Taveras also had a sacrifice fly in the sixth and an RBI triple in the fourth off Justin Verlander.

"I was not trying to do too much," Taveras said of his approach against Verlander. "He's a really good pitcher, and I was just trying to put the ball in play."

Taylor Hearn (5-6) pitched a perfect ninth for the win.

Verlander yielded three runs on five hits with seven strikeouts in six innings. He leads the majors with 15 wins and a 1.85 ERA.

The three runs were the most Verlander had allowed since surrendering seven in a loss to the White Sox on June 18, snapping a streak of seven straight starts giving up two runs or fewer.

"I think I made some good pitches," Verlander said. "A couple things just didn't go my way, and that's OK. That's baseball. I thought the stuff was actually pretty sharp. I thought my slider was pretty good. A lot of positives to take away from it. Obviously, not the type of boxscore I would like to have, but I was able to grind through six."

Kyle Tucker and Yordan Alvarez each hit solo home runs for the AL West-leading Astros. Tucker hit an RBI single in the 10th. Houston finished 1-for-10 with runners in scoring position.

"I thought we did have some opportunities," said Houston bench coach Joe Espada, who managed the team with manager Dusty Baker out after testing positive for COVID-19 last week. "I didn't think it would come back to haunt us, but those opportunities once you get them, you want to capitalize."

Verlander broke a tie with Mets ace Max Scherzer - for now - for 14th on the all-time strikeout list and now has 3,147 in his career. Pedro Martinez is 13th with 3,154 strikeouts.

LITTLE LEAGUERS IN THE HOUSE

Pearland Little League, which won the Southwest Regional and advanced to the Little League World Series, was in attendance for the game. The team went down to the field pregame for autographs from Astros players and were shown on the big screen during the game.

The Astros will send LHP Framber Valdez (10-4, 2.87 ERA) to the mound Thursday in the series finale opposite LHP Cole Ragans (0-0, 0.00 ERA), who will be making his second career start.