Verlander can't close out Yanks; ALCS heads back to Houston 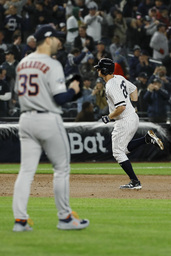 When it bonked hard off the bright yellow foul pole for a three-run homer, Verlander crouched beside the mound and simply held up his glove, waiting for a new baseball as the Yankee Stadium crowd roared.

Houston's star pitcher had put his team in an early hole - no doubt about that now. And when the Astros were unable to rally during a 4-1 loss Friday night to New York, their first of three chances to close out this AL Championship Series was gone.

And the one just before that off DJ LeMahieu's bat.

"I was able to settle down," Verlander said. "Too little too late."

Earlier this season, Verlander playfully waved at Yankees fans as he walked off the mound on the way to a win. He entered Game 5 of the ALCS with a 4-0 record and 2.38 ERA in seven previous postseason starts against New York. But he was unable to put away these Bronx Bombers for good, struggling through a four-run first that ate up 29 pitches and marked his worst inning in two-plus years with the Astros.

Houston still headed home with a 3-2 lead in the best-of-seven playoff - and one more ace up its sleeve.

October star Gerrit Cole, who is 19-0 since May, would be ready on full rest if the series goes to a deciding Game 7. Comforting thought for the Astros as they seek a second World Series trip in three years.

To push it that far, the Yankees must win Game 6 on Saturday night at Minute Maid Park, where both teams are planning bullpen games on the mound.

"We have to go and take care of business at home," Verlander said.

"I'm extremely confident in our bullpen. Our bullpen's been incredible all season long. Another reason that I really felt I needed to get deep in this ballgame was to save those guys as much as possible going into tomorrow because I knew it was going to be a bullpen day," he added.

So the fact that Verlander, the 2017 ALCS MVP against the Yankees, settled into a serious groove and lasted seven innings was a big help in saving the relief corps. He retired 20 of his final 21 batters after Hicks' home run, permitting only a soft single during that stretch, to finish with nine strikeouts and no walks.

"He was incredible after the first," manager AJ Hinch said. "I thought he recovered great and did his best to continue to keep us in the game."

But the damage was already done.

While fellow aces Cole and Zack Greinke were mostly able to escape first-inning trouble in the Bronx over the previous two games, Verlander wasn't. And that terrible start prevented him from finishing off the Yankees.

It was similar to the Division Series against the wild-card Rays, when Verlander lost 4-1 on three days' rest at Tampa Bay with an opportunity to end the series. He was on a regular schedule this time, but maybe the eight-time All-Star had trouble fully getting loose at the start in 52-degree weather.

It was the coldest game-time temperature for one of Verlander's starts since it was 50 degrees for Game 1 of the ALCS last year in Boston, according to STATS. He walked four in six innings that time but won 7-2 at Fenway Park.

Verlander also was unable to wrap up the 2017 World Series in Game 6 at Dodger Stadium after a sensational postseason to that point. He pitched well for six innings but lost 3-1 before Houston took the title the next night.

After the Astros grabbed a 1-0 lead Friday against James Paxton in the top of the first, Verlander gave up four hits to his first five batters - three for extra bases.

LeMahieu hit a leadoff homer to right field on Verlander's second pitch and Hicks fought back from 0-2 to a full count before pulling an 88 mph slider down the line.

"Fastball command wasn't very good, and the slider was just hanging. I just wasn't able to execute really anything," Verlander said . "I thought I could have made some better pitches. I had my opportunities. I was able to get a strikeout and then I had Hicks in the hole. Just wasn't able to execute on anything. I got ahead of him early. Had opportunities to get a strikeout and I hung him a slider 3-2."

It was the first time in their 405 postseason games that the Yankees homered twice in the first inning.

The 36-year-old Verlander, the 2011 AL MVP and Cy Young Award winner, led the majors with 21 wins and 223 innings pitched this season. He also threw his third career no-hitter.

The last time he gave up four runs in the first inning was in August 2014 with Detroit against the Pittsburgh Pirates.

"I've had some rough innings before. Turn the page and start from scratch, really. At that point you're hoping and praying that your team can fight and claw back and get you back in the ballgame. But at the same time, especially in the playoffs, especially when you have four games in a row, I'm trying to save our bullpen as much as possible," Verlander said.

"Very disappointed in the first and then not so disappointed the rest of it. I was able to at least take away a positive from the last six innings of keeping our bullpen fresh and hopefully that helps us win another ballgame."

It was the first postseason game in major league history in which both teams scored in the first inning and neither one did so again.

Now, it's back to Houston.