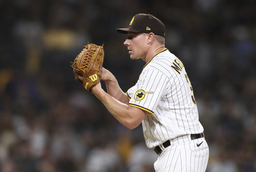 PHOENIX (AP) The Arizona Diamondbacks made a move to solidify the back end of their bullpen on Wednesday, adding four-time All-Star Mark Melancon on a $14 million, two-year deal.

Now the D-backs have to get good enough to provide Melancon some games to actually save.

The right-handed Melancon, who will be 37 by opening day, led the big leagues with 39 saves last year in his only season with the San Diego Padres. He had a 4-3 record and 2.23 ERA to earn his first All-Star appearance since 2016.

The D-backs had problems all over the roster last season, finishing with a 52-110 record, but a bad bullpen was among the worst issues. Almost all spots will be up for grabs next season, though holdovers like Joe Mantiply, J.B. Wendelken and Caleb Smith are prime candidates to relieve.

Arizona didn't have many leads to protect last season during the ninth inning. The entire pitching staff combined for 22 saves.

Melancon said he believes that will change in a hurry. The veteran pitched against the Diamondbacks - who were division rivals with the Padres in the NL West - eight times last season and said it was a tough group to face.

"It's tough to see it when you just look at paper, but when you're facing these guys and trying to get them out, it's a different story," Melancon said. "I got to see it first hand. I'm very confident in this group."

Melancon will almost certainly be the team's closer. He played in college at Arizona and has 244 career saves over a well-traveled 13-year MLB career that includes time with the Pirates, Giants, Braves, Yankees, Astros, Red Sox, Padres and Nationals.

"He's a proven back end bullpen guy," Arizona general manager Mike Hazen said. "We talked at the beginning of the offseason about wanting to rebuild our pen. It was a major issue for us last year. ... Getting a guy in this spot was important for us."