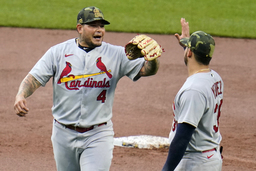 The Cardinals also announced that right-hander Alex Reyes is going to have shoulder surgery later this month.

The 27-year-old Reyes met with Dr. Neal ElAttrache in Los Angeles on Monday. He wanted a second opinion about his ailing shoulder that has kept him on the injured list all season.

The move with the veteran catcher comes one day after Molina made his first career pitching appearance, working the ninth inning of an 18-4 victory at Pittsburgh. He allowed a pair of homers and four runs while finishing the Cardinals' three-game sweep.

The 39-year-old Molina is batting .239 with two homers and eight RBIs in 26 games in what likely will be his final big league season.

Molina's son injured his arm playing baseball in Puerto Rico and will have surgery Tuesday morning.

Rookie catcher Ivan Herrera was recalled from Triple-A Memphis. The 21-year-old Herrera, one of the organization's top prospects, is looking for his big league debut.

Reyes was shut down this month after he experienced renewed shoulder soreness.

Reyes has battled injuries for several years. Tommy John surgery in 2017 cost Reyes the most time on the injured list, but his shoulder also has been a consistent source of concern for the last few years.

Reyes converted his first 22 save opportunities in 2021 before soreness and wildness in the strike zone resulted in him eventually losing his closer job to Giovanny Gallegos. Reyes surrendered Chris Taylor's game-ending homer in the NL Wild Card Game against the Los Angeles Dodgers.

Reyes, who turns 28 in August, has a $2.85 million salary this season in the second of three arbitration-eligible years.