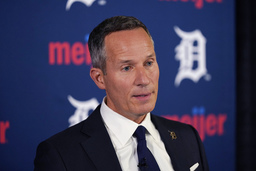 Avila was fired as Detroit's general manager on Wednesday, ending a seven-year tenure without a playoff appearance.

"I wish the results would have been better this season," Avila said in a statement released by the team. "But know there is a lot to look forward to in the coming years."

Owner Chris Ilitch announced the move with his team mired in another disappointing season. Detroit entered Wednesday at 43-68, last in the AL Central.

"Our progress certainly stalled this season," Ilitch said a couple hours before the Tigers hosted Cleveland.

Ilitch invested millions in the offseason in an attempt to return his team to contention.

"All of us - the players, front office and many of you (reporters) - had high expectations and excitement for the season," he said. "Unfortunately, we did not see progress this season at the major league level. Big reason why I decided it's time to make a change."

The Cuban-born Avila was the only current Latino general manager or equivalent in MLB, which has few minorities in leading front-office positions.

Chicago White Sox executive vice president Kenny Williams is the only Black leader of baseball operations for any club, Marlins GM Kim Ng is the only woman and Asian-American in that role, and Giants president Farhan Zaidi, who is of Pakistani descent, is the only Muslim.

Avila was promoted to general manager on Aug. 4, 2015, after serving as Dave Dombrowski's assistant.

Avila's chance to lead the team coincided with a rebuilding process that prevented him from making short-term moves to win.

In hopes of long-term gain, Detroit dealt star pitcher Justin Verlander and All-Star outfielder J.D. Martinez in 2017, but the players the Tigers got in return didn't end up helping in the majors.

"I didn't trade those players away," Ilitch said. "Our general manager did. Al did."

The Tigers lost, a lot, and Avila attempted to lead a turnaround by drafting and developing players. The results haven't been what the team hoped for.

Avila finally got the freedom to spend money this past offseason, but his two biggest investments haven't panned out, either.

Javier Baez, signed to a $140 million contract to address a desperate need at shortstop, has struggled in the field and at the plate. Earlier in the offseason, Avila gave Eduardo Rodriguez a $77 million, five-year contract, but the left-hander went on the restricted list due to personal matters in June and hasn't worked his way back to Detroit.

Detroit seemed to be poised for a breakthrough after winning 77 games in 2021, its best record since 2016, which was its only winning season under Avila.

"Last year, we had some momentum," said manager A.J. Hinch, who added he's not interested in also being the the team's GM. "This year, we hit a roadblock.

"Today is another reminder that we haven't succeeded. The record reflects where we're at."

Avila has more than three decades of experience in baseball. He was Dombrowski's assistant with the Marlins, whom he helped sign Miguel Cabrera when he was 16. Avila worked with the Pittsburgh Pirates as a special assistant in 2002 before rejoining Dombrowski in Detroit.