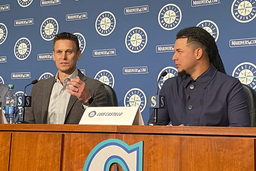 SEATTLE (AP) In the middle of putting the finishing touches on the largest and most complex contract in franchise history, the Seattle Mariners began discussions about another impact deal.

Would newly acquired right-hander Luis Castillo be interested in talking about calling Seattle home for the long haul?

When the answer came back "yes" at the same time the Mariners were finishing their massive deal with AL Rookie of the Year favorite Julio Rodriguez, it sent Seattle's front office into overdrive.

"When you have players like this that you think are the best players in the league and guys that have a chance to grow into the anchors, the guys that you're hanging billboards on the side of the stadium for and you're doing those two things at once, I mean, it's a huge adrenaline rush," Seattle assistant general manager Justin Hollander recalled Monday. "And to be doing two of them at once is exhilarating and exciting. And you're also very nervous."

Seattle ended up getting both deals done. Rodriguez was taken care of last month with a deal that could keep him with the Mariners well into the next decade. And Castillo's deal was finished up over the weekend, a five-year contract worth $108 million that includes an option which could make the deal for six years and worth $133 million.

At the very least, Castillo and Rodriguez are set to be teammates through 2027 and anchors for a team that could be ending the longest playoff drought in baseball later this week.

"The first thing that really caught my attention was the personality of the team," Castillo said through an interpreter. "When I came in here and saw firsthand just the people here and how tight and competitive this team was, it was one of the things that convinced me the most."

Castillo was the big trade-deadline acquisition for the Mariners when they got him from Cincinnati. The hope was Castillo would be the difference in Seattle's push to reach the postseason and that the Mariners could convince him to stick around longer in the process.

It worked, although it took a big financial commitment and some ingenuity in adding a sixth year onto the deal, which is something Castillo wanted. It came in the form of a $25 million option for 2028 that would become guaranteed if Castillo pitches at least 180 innings in 2027 and an independent physician determines he doesn't have an injury that would cause him to start 2028 on the injured list.

Seattle also has protections in the contract in case Castillo runs into arm trouble in the later stages of the contract.

"Just like we learned in the deal with Julio - finding ways to deliver potential upside for the player and protection for the club where we can," Seattle President of Baseball Operations Jerry Dipoto said.

The 29-year-old Castillo was selected to the National League All-Star team in July for his second All-Star appearance.

His signing also takes finding another starting pitcher off the to-do list for Dipoto this offseason. Seattle has Castillo, Robbie Ray, Logan Gilbert and George Kirby all under club control through 2026.

"We've been building toward this," Dipoto said. "We felt good about our starting rotation entering the season. We feel really good about it now. And if we can keep these guys healthy and doing what they do, it should be fun for a lot of years."