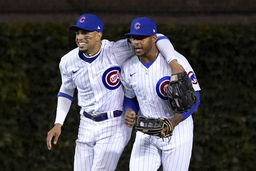 At the end of another long year, the Chicago Cubs felt they were moving in the right direction.

"We've made some adjustments. We've gotten better in a lot of places," Steele said. "There's a lot of young guys that are finding their own on this team, and it's been a lot of fun to watch."

The Cubs went 74-88 this year, a three-win improvement from last season that was good enough for third in the lackluster NL Central. It was the first time that Chicago finished with a losing record in consecutive years since a string of five in a row from 2010 to 2014.

The season was marked by a pair of long losing streaks; a 10-game slide in June when Chicago was outscored 90-30, and a nine-game skid in July.

"I think there's been a lot of learning that's gone on, which is the exciting thing," said outfielder Ian Happ, a first-time All-Star who set career highs with a .271 batting average, 42 doubles and 72 RBIs. "I think the pitching staff's been unbelievable in the second half. The numbers back that up, but it's been really fun to watch the development there."

The Cubs also got a lift from the 23-year-old Morel, who made his big league debut in May and finished with 16 homers, 47 RBIs and 10 steals.

"We'll continue to grow and we've got a long way to go to get better to be competing for a World Series," manager David Ross said, "but these guys are on a mission to do that, and as long as we keep that mindset, we're going to be fine."

Catcher Willson Contreras is eligible for free agency after batting .243 with 22 homers and 55 RBIs in 113 games in his seventh big league season. The three-time All-Star helped Chicago win the World Series in 2016.

The Cubs likely will make a qualifying offer to Contreras, who turns 31 in May. If he departs, it would leave a big hole behind the plate.

Seiya Suzuki made a strong first impression in his first big league season after the Japanese outfielder finalized an $85 million, five-year contract with the Cubs in March. He hit .262 with 14 homers and 46 RBIs in 111 games.

Chicago's bullpen set a franchise record with a major league-best 716 strikeouts, one more than its total for the 2021 season. The Cubs had 10 players record at least one save, but David Robertson was traded to Philadelphia on Aug. 2 and the team likely will upgrade Ross' late-inning options over the winter.

Morel made at least one start at five different positions; second base, third base, shortstop, left field and center field. He provides some flexibility for President of Baseball Operations Jed Hoyer as he ponders his options for upgrading the team in the offseason.

"I'm here to do everything for the team," Morel said through a translator. "Wherever the team needs me to play, I'll play."

Kyle Hendricks could provide a lift for Chicago in 2023 if he can find a way to return to his previous form. The right-hander missed the last part of the season with a capsular tear in his shoulder. He finished with a 4-6 record and a career-high 4.80 ERA in 16 starts.