Guardians make name for themselves with surprise 2022 season 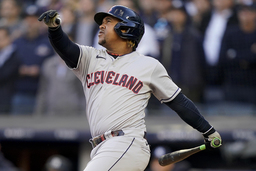 CLEVELAND (AP) The Guardians made quite a name for themselves this season - from outcasts to October contenders.

With questions scattered across the roster out of spring training, they weren't supposed to win the AL Central in a runaway. They weren't picked to sweep Tampa Bay in the wild-card round. They definitely weren't expected to push the New York Yankees to the limit before running out of rallies.

But baseball's youngest team - 17 players made their major league debuts in 2022 - grew up much faster than anyone expected, and in doing so, the Guardians reconnected with a Cleveland fan base still wearing its Indians gear.

"We can definitely build from this," rookie outfielder Steven Kwan said Tuesday night in a somber clubhouse inside Yankee Stadium, still rumbling from the home team's 5-1 win to advance to the AL Championship Series.

"It's really fresh right now, but I'm sure after a couple days, we'll be able to reflect, learn some things from the situations we've been in and hopefully move on from there."

The foundation is set. The future is bright for a franchise that hasn't won the World Series in 74 years.

Nobody, and that includes some inside the organization, envisioned the Guardians putting together this season. But by embracing their youth and not using it as an excuse, manager Terry Francona's team defied odds and came within a couple errant pitches and timely hit or two of being one of the last four teams standing.

"This is the most special group I've ever been a part of," said catcher Austin Hedges, one of the team's emotional leaders and only notable free agent. "It's a year I'm never going to forget."

It began with All-Star third baseman Jose Ramirez's decision to sign a seven-year, $141 million contract on the eve of opening day, the team-friendly deal shifting the focus away from Cleveland's contentious name change and quiet offseason.

Ramirez's commitment set the tone off the field, and he led the way on it (29 homers, 126 RBIs, defensive excellence) with a season worthy of MVP consideration, if not for Aaron Judge and Shohei Ohtani's brilliance.

Incredibly, Ramirez did it while playing the season's second half with a torn ligament in his right thumb. The team said Wednesday that Ramirez suffered the injury in June. He'll undergo surgery next month and is expected to need two months to recover.

The Guardians said Ramirez's offseason training will not be significantly affected and he should be ready for the start of the 2023 season.

Kwan emerged as one of the game's best leadoff hitters while embodying the team's offensive ethos: slash over smash.

Cleveland offset a lack of big bats by focusing on making pitchers work, hitting for contact and putting the ball in play. Derided by some fans in this swing-for-the-fences era, the style worked for the Guardians and helped them stage late-inning comebacks that became routine.

The Guardians won an MLB-high 29 games in their final at-bat, and posted 40 comeback wins.

It was two bloops that propelled their shocking comeback win in Game 3 of the ALDS over the Yankees, who had been 167-0 in their rich postseason history while leading by multiple runs heading into the ninth inning.

There was no such magic in a winner-take-all Game 5 (Cleveland has lost eight straight of those since 1997), and when the Yankees recorded out No. 27, second baseman Gleyber Torres mocked the Guardians by pretending to rock a baby the way Cleveland's Josh Naylor did during his home run celebration a day earlier.

The Yankees put Cleveland to sleep. The baby may soon be too big to cradle.

"Our plan was to shock the world through the whole thing," Hedges said. "We wanted to win the World Series. That's a good Yankees team. But the cool thing is now we've got a bunch of dudes with a ton of playoff experience in the most hostile environment you can imagine.

"Watch out for the Guards next year."

The 63-year-old Francona isn't under contract for next season, but there have been discussions and all signs point to him returning for an 11th season in Cleveland.

Although he's won two World Series, this was one of Francona's best managing jobs as he and his staff got the most out of a team lacking experience. Francona was also in a better way physically after having his two previous seasons cut short by health issues.

While "small ball" made for a fun storyline, it didn't dent the Yankees.

Cleveland outhit New York (44-28) but got outhomered (9-3) by the AL East champions in the five-game series.

The Guardians lack a proven cleanup hitter, a void created when Franmil Reyes struggled and got traded. Postseason hero and SpongeBob SquarePants fan Oscar Gonzalez has shown the potential to put up power numbers, but Cleveland's best avenue to add a slugger could be through trade or free agency.

The bottom line is the Guardians can't count on singles, steals and hustle. After scoring just 17 runs in seven postseason games, they need someone who can change the scoreboard with one swing.

Blitzer, also a part owner of the NBA's Philadelphia 76ers and NHL's New Jersey Devils, will give the club more resources to better compete in the free-agent market, a place Cleveland has rarely ventured in recent years.

The Guardians may still not court the top players, but should be able to take a stronger run at those second-tier free agents out of reach in the past.