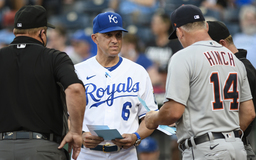 The White Sox announced the move Thursday after Grifol agreed to take the job earlier in the week.

General manager Rick Hahn mentioned in a statement the 52-year-old Grifol's experience in a variety of coaching and scouting roles at the major and minor league levels. He also cited the fact that Grifol is bilingual and called him a "modern baseball thinker."

"He is an excellent communicator and an experienced game planner who brings a high energy and detail-oriented approach to leadership," Hahn said. "He is committed to building an inclusive and cohesive clubhouse, and we could not be happier to have Pedro leading our club."

The 52-year-old Grifol will try to lift a team coming off a disappointing season. The White Sox finished second in the AL Central at 81-81 and missed the playoffs after running away with the division in 2021. La Russa missed the final 34 games because of health problems and announced he would not return, ending a disappointing two-year run with the franchise that gave him his first job as a big league skipper.

Grifol spent the past 10 seasons in a variety of coaching roles with Kansas City under former managers Ned Yost and Mike Matheny. He was part of teams that captured back-to-back pennants and won the World Series in 2015.

Grifol spent the past three seasons as the Royals bench coach. He interviewed for the managing job after Matheny was fired as part of a widespread shakeup within the organization after a 65-97 finish - Kansas City's sixth straight losing season. The Royals hired Tampa Bay Rays bench coach Matt Quatraro as manager on Sunday night.