White Sox banking on spark from Grifol to give them jolt 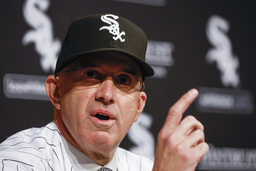 CHICAGO (AP) It wasn't long ago that the Chicago White Sox looked like they were poised for bigger and better things.

They had a young and vibrant playoff team and a fanbase excited about the possibilities.

Now they're counting on new manager Pedro Grifol to help restore the swagger that disappeared during a disappointing season this year.

The White Sox made it official on Thursday, announcing the 52-year-old Grifol is taking over for Hall of Famer Tony La Russa. Grifol agreed to take the job earlier in the week.

Grifol brings experience in a variety of coaching and scouting roles at the major and minor league levels. He spent the past three seasons as the Kansas City Royals' bench coach. And now, he has his first managing job in the majors.

"This is an extremely talented ballclub," Grifol said. "And it was a really difficult club to prepare for because if the energy was high, they can beat anybody in the game. And if the energy wasn't, we were able to have some success against them. My job - and my staff's job - is gonna be to make sure that that energy is high every night and we're prepared to win a ballgame."

The White Sox came into the season with soaring expectations coming off back-to-back playoff appearances for the first time in franchise history. Instead, they were one of baseball's biggest disappointments.

They went from running away with the division to finishing second in the AL Central at 81-81 and missing the postseason. La Russa missed the final 34 games because of health problems and announced he would not return, ending a disappointing two-year run with the franchise that gave him his first job as a big league skipper.

It's now up to Grifol to help restore the vibe the White Sox had following the pandemic-shortened 2020 season. That team led by AL MVP Jose Abreu and young stars like Tim Anderson gave Chicago its first playoff appearance since 2008.

The White Sox then fired manager Rick Renteria and made a surprising choice to replace him. Chairman Jerry Reinsdorf lured his longtime friend La Russa out of retirement even though he hadn't filled out a lineup card since leading the St. Louis Cardinals to the 2011 World Series championship.

"We were extremely proud of what we were able to accomplish in the early parts of this rebuild and the position that we were in a few years back," Hahn said. "Even though we decided that we had to make a change after 2020, I think it was pretty clear that the arrow was pointing up for us. And thus far, what we've been able to show for that is one division title and a first-round exit. That's not who we envisioned ourselves being, and part of that disappointment I think permeated the way the clubhouse was viewed - and viewed itself."

The White Sox were hit hard by injuries, with Anderson and sluggers Eloy Jimenez and Luis Robert missing significant time because of injuries. Catcher Yasmani Grandal and third baseman Yoan Moncada also had health issues, and they underperformed when they were on the field.

There were embarrassing breakdowns on the bases. The defense was a problem, and an unbalanced lineup that was heavy with right-handed hitters had issues. Even so, the White Sox believe they have the core to compete, that their window isn't shut.

Hahn said an initial list of candidates for the managing job swelled from about 22 or 24 to 30. Grifol was the second of eight to get first-round interviews before the list was whittled down.

Grifol, a former minor league catcher, spent the past 10 seasons in a variety of coaching roles with Kansas City under former managers Ned Yost and Mike Matheny. He was part of teams that captured back-to-back pennants and won the World Series in 2015. He also worked for the Seattle Mariners for 13 years as a coach, scout and manager.

Grifol said getting the call from the White Sox that the job was his was "extremely emotional."

"I've been in this game for a long time," he said. "All I've ever wanted to do was manage a baseball team. It didn't matter if it was the minor leagues or the big leagues, I wanted to manage. This game has a tendency to kind of grab you and take you other places, and if you don't check yourself, you're gonna end up somewhere where your passion doesn't sit. That's where I was."