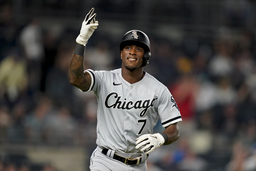 The White Sox announced the moves on Monday. Harrison is owed a $1.5 million buyout and becomes a free agent.

The 29-year-old Anderson hit .301 with six homers, 25 RBIs and 13 steals in 79 games in his seventh big league season. He was the starting shortstop for the American League in the All-Star Game in July.

Anderson missed the end of the season after he was placed on the 10-day injured list on Aug. 9 with a middle finger injury on his left hand.

Anderson was selected by Chicago in the first round of the 2013 amateur draft. He agreed to a $25 million, six-year contract in March 2017 that also includes a $14 million club option for 2024.

The 35-year-old Harrison batted .256 with seven homers and 27 RBIs in 119 games this season. He finalized a $5.5 million, one-year contract with the White Sox in March.