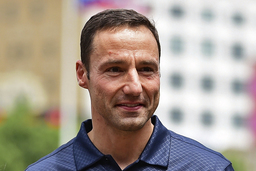 LAS VEGAS (AP) Cleveland Guardians President of Baseball Operations Chris Antonetti was voted Major League Baseball's Executive of the Year on Tuesday after his young team won the AL Central with a $68 million payroll that was 27th among the 30 teams.

Cleveland went 92-70 while using 17 players who made their major league debuts. The youngest team in the postseason, the Guardians lost a five-game Division Series to the New York Yankees.

A 1996 graduate of Georgetown with a master's degree from Massachusetts in business administration, Antonetti started in MLB as a Montreal Expos intern in 1997 and became assistant director of player development that November. He joined Cleveland in 1999 and became assistant general manager three years later.

The award was announced on the first full day of the annual general managers meetings.