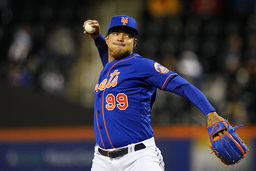 SAN DIEGO (AP) The active Philadelphia Phillies added Taijuan Walker to their rotation on Tuesday, agreeing to a $72 million, four-year contract with the right-hander.

A person familiar with the negotiations confirmed the move to The Associated Press on condition of anonymity because it was pending a physical.

It was the second major free-agent score for the Phillies at the winter meetings after they reeled in shortstop Trea Turner on Monday with a $300 million, 11-year deal. Walker and Turner join a Phillies team that made it to the World Series this year before losing to the Houston Astros.

The 30-year-old Walker went 12-5 with a 3.49 ERA in 29 starts this season for the New York Mets, one of Philadelphia's biggest NL East rivals. He slots into a rotation fronted by Zack Wheeler and Aaron Nola.

Asked about the market for Walker earlier in the day, agent Scott Boras said it was robust.

"As you can see in the marketplace, there's a whole number of pitchers that are throwing 60 and 70 innings that have been pursued, probably with the exception of (Jacob) deGrom, at the lower end of threshold around $13-15 million a year because the demand for quality pitching is so great," Boras said.

"So, Tai ... is one of the younger ones, one of the more durable ones and we expect him to be pursued greatly as his market unfolds."

Walker was selected by Seattle with the No. 43 pick in the 2010 amateur draft. He made his big league debut with the Mariners in 2013.

Walker signed with New York as a free agent in February 2021. He turned down a $7.5 million player option last month in favor of a $3 million buyout, making his deal worth $17 million over two seasons.